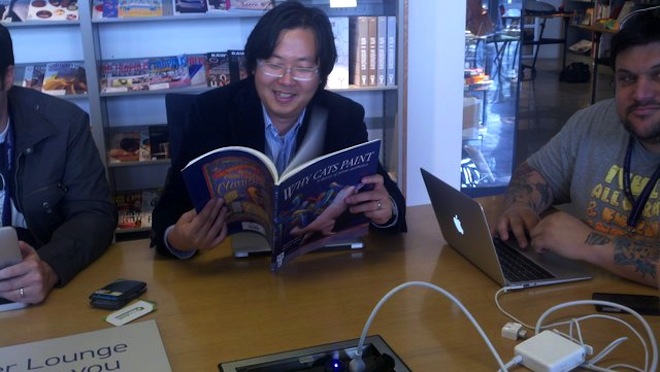 Sitting in a crowd in Omaha, Nebraska is not the most likely place that you’d end up listening to Ben Huh. He’s an outspoken guy with a happy demeanor and a reliance on LOLcat-infused slides to tell his story. He strides onto the stage of Big Omaha and starts his prose.

For those unfamiliar, Huh’s early years led him to the United States as an immigrant (Huh would state in passing, later, that the Startup Visa would have made his life so much more simple). After a failed early attempt to break into Internet business, he found himself tens of thousands of dollars in debt and then “BS’d [his] way into I Can Haz Cheezburger by saying ‘yeah, I know something about Google AdSense.”

Huh walks the stage, recounting the story with a candor that many would think would be difficult for him to carry these days. Though he’s been named to Fast Company’s list of the Most Creative People of 2010, he’s also been accused of running a “low-paying” empire and he’s subjected himself to being ripped apart by the readers of Reddit in an “Ask Me Anything” thread on the site.

But that doesn’t stop Huh from telling the somehow humorous story of asking for investments — “I would like to start a media company by buying a cat picture website. Can you give me $2.25 million?” But it’s that same tongue-in-cheek attitude that has gotten Huh the 2 million that he needed, plus much more.

As of the time of this writing, Huh’s Cheezburger Network boasts traffic of over 400 million monthly page views, it recently paid “low seven figures” for Know Your Meme and Huh is nowhere near finished. But it’s not a matter of simply creating more LOLcats, Huh’s goal is much loftier.

“We [as Internet users] produce more content in one day than the media does in a year.”

As evidenced by the traffic numbers to the Cheezburger sites, that content doesn’t have to be the most important thing that you’ve seen today. In fact, that’s just about the opposite of where Huh intends to land. His stated goal? Huh wants to make you happy for 5 minutes each day.

In a time when there is a lot of talk about the benefits of formal versus street education, Huh is a master of understanding on the basis of entrepreneurship.

“Things that excite us make other people cringe. What makes a successful startup CEO? Someone who doesn’t understand the word no. You need a little insanity in order to be successful. You need to know how to survive failure.”

Apparently the philosophy has worked well for Huh. With $32 million in total funding for the network, he continues to expand it while keeping his eye out for other avenues. Surprisingly, none of this seems to have gone to his head.

It’s easy, these days, for the “celebrities” of the Internet to take on that rock star mentality. But Huh is low key almost to the point of making you double-take that you’re speaking to the right guy. Instead of sweeping in, doing his talk and leaving, Huh took the time to hang out for the entire day of Big Omaha. He spent time sitting in a library turned blogger lounge, browsing submissions for ICHC and talking to startup owners. I overheard him giving some advice to one CEO founder and then he was cracking jokes back on the stage a few minutes later for a speaker Q&A session.

That “friend next door” mentality is likely a key factor in Huh’s success. Here in Omaha, Nebraska, there isn’t room for attitude. It’s a city that can easily be wiped cleanly to the ground by a spring tornado and the careful, calculated nature of its residents is a testament to their awareness of that. In a world that is dominated by multi-million dollar deals and skyrocketing valuations, Huh’s quiet candor is a refreshing change toward normalcy.

A property of the Cheezburger Network may not be on your top sites to visit as you wake up in the morning, but perhaps it should be. Maybe we’d all be a little bit better off if we just spent the first 5 minutes of our day being happy. If Ben Huh has his way, we’ll do just that.

Read next: These are the types of apps Twitter thinks developers should be building