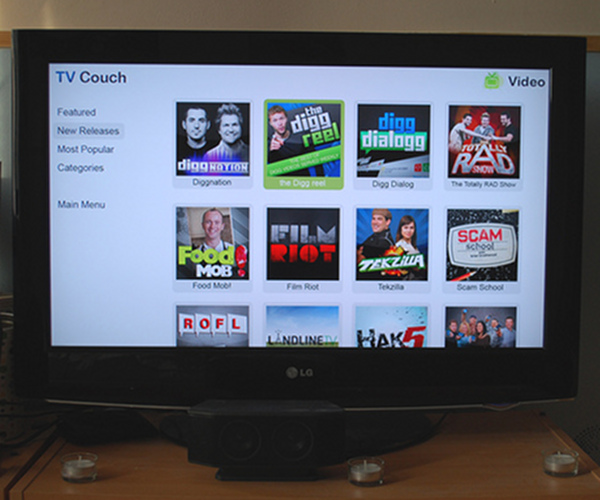 With the battle for Internet-connected home media players heating up between Boxee, Apple, Google, Roku and game consoles you might think there isn’t room for another contender.

TV Couch hopes that isn’t the case as it prepares to launch a rival that doesn’t require any kind of app or set-top box. Instead, it will run directly from your browser.

Promising HD TV shows, podcasts, radio and social features, it sounds a lot like Boxee to us, with the useful exception that it’s entirely browser-based. This means you can hook your computer up to your TV for a traditional ‘home theater’ experience, run it on a laptop while you’re out and about and even, apparently, on mobile devices.

If the Glasgow, UK based team can pull it off they could be on to something here. TV Couch’s Joe Finnigan is enthusiastic about the tech behind the system: “Once you launch TV Couch, you forget your even in a browser. We can stream up to 1080p full-screen at 30 fps no problems at all, it looks really pretty. We also have variable streaming technology, so if your on a 2MB internet connection then you’ll still be able to watch without buffering at a slightly lower quality.” Comparing TV Couch to chief competitor Boxee, Finnigan says “Boxee has an inconsistent interface. Each channel or publisher has their own ‘App’. This means viewers have to re-learn how to use each one just to watch one of their shows! On TV Couch, the interface is the same throughout.

“We’re really focused on making the interface super simple, it’s all about the content and getting the viewer to it as quickly and easily as possible. It just works, it’s incredibly cool.”

Of course, the benefits of running in a browser and a simple interface are nothing without content that users want, and this is likely to be the make-or-break aspect of TV Couch. The platform is self-service, meaning that producers of any size from major studios to independent podcasters can upload their content with equal ease. “We will be talking with as many of the big networks as we can to get them on-board, but indies can get their content on just as easily”, says Finnigan. “It really is levelling the playing field for publishers.”

The problem here is that a level playing field favours small, independent publishers, while big publishers tend to prefer their own deals that give them a prime space in navigation menus and programme guides.

Still, TV Couch has time to ensure the audience-pulling big names are in place. Assuming all goes to plan, you can expect TV Couch to launch worldwide in summer 2011.

Read next: Google thanks 1 million Adwords customers by name in one impressive video