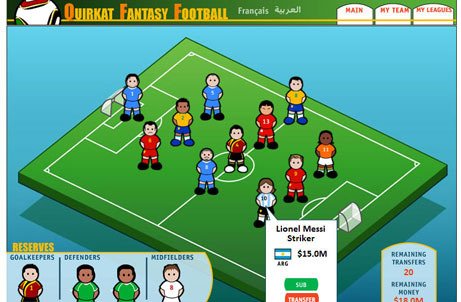 In the game all 736 players from the 32 teams participating in this summer’s World Cup in South Africa are featured and fully customized in a visually rich playing environment.

Teams are scored against a host of real-world player events, such as scoring, successful defending, and bonus points for Man of the Match stature. The game also allows users to create their own leagues in which they can compete head to head against selected friends.

The app is a rather interesting addition to the Arabic online gaming scene with its ambitious application of the micro-transaction model which allows users to increase their team’s budgets and other functionalities. It marks Quirkat’s first attempt at Fantasy Games after their success in gaming showcased in Arabian Lords, Al-Moosiqar Franchise and Fuzztak.

It’s been in the Facebook Application Directory for about a week now and has been able to attract a couple hundred users which looks promising, check it out here and let us know how it goes.

Read next: The Darker Side Of America