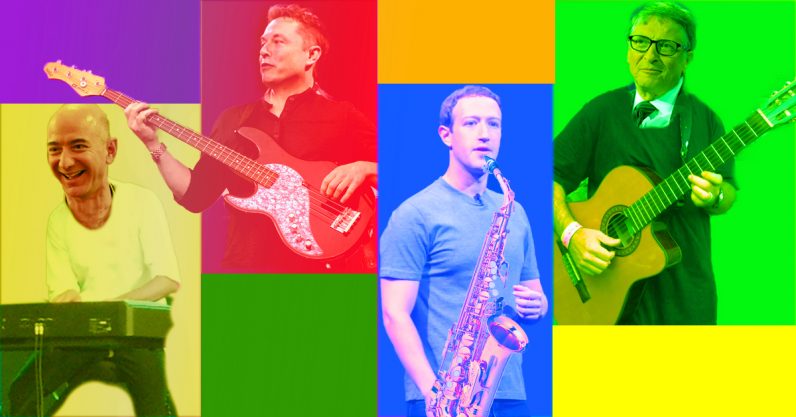 The facts that climate change is real and music relieves stress are the only two things scientists, by-and-large, seem to be in complete agreement on. That’s why we’re here to convince you to stop throwing plastic in the ocean and start playing a musical instrument.

Step one: stop throwing plastic in the ocean.

Moving on. Research shows that learning to play a musical instrument lowers stress, reduces anxiety, aids in developing problem-solving skills, stimulates the imagination, and provides a sense of accomplishment. If you’re still not sold, the act of playing a musical instrument also directly affects the areas of the brain associated with creativity and orgasms.

Let’s start with triage. Experts believe even modest amounts of screen time and interaction with digital media can damage your mental health. The never-ending stream of digital information turns us into scrolling zombies. But playing an instrument is one of the most engaging and deeply mindful experiences you can have. It’s like an antidote to the mindlessness that comes with infinite scroll. Playing music, like daily meditation or hitting the gym, requires focus and attention. Most people who play regularly do so because it makes them feel better.

TNW spoke with Dr. Daniel Levitin, a neuroscientist and author of the book “This is Your Brain on Music.” We asked him why people in the STEM industries should pick up an instrument. He said:

I believe that STEM is important. I’m not just a scientist myself, but a university science teacher. But decades of research have shown us that the best students and workers are those who can engage in creative thinking and creative problem solving.

Creative hobbies prime the pump for that. They give us practice in engaging our brains in different modes of thinking that inform our STEM work. Moreover, they serve as a much-needed mood regulator and emotional modulator that restores a sense of balance to our lives.

Take the guitar, for example; it’s incredibly complex — there are six strings, 24 frets, and an entire language to learn. Once you figure out where to put your hands, it still takes months of practice before the “muscle-memory” kicks in. And whether you’ve been playing for 15 minutes or 75 years, there’s always something new to learn.

The benefits go even deeper for STEM workers. Levitin said:

Learning an instrument helps to develop a sense of mastery. It engages people with the creative arts. It allows them to engage in a conversation with some of the greatest minds who have walked the earth, composing music that has lasted centuries. Imaging being able to put your fingers on an instrument in the same configurations as Ségovia, or Hendrix, to be those musicians for an hour a day.

And it’s never been easier to get started. If you wanted to learn how to play guitar twenty years ago, you either took lessons or taught yourself how to play by ear. Some of us, who might otherwise enjoy strumming the old six-string, aren’t very keen on either of those methods — or simply don’t have access.

Now there are tutorial videos, games, and apps that will take you from holding your instrument for the first time to playing your favorite songs. This means even if you live in Antarctica, you can get help with the basics. In fact, every company that makes musical instruments invests heavily in helping new musicians learn how to play. Nobody buys a second instrument if they don’t learn to play their first.

We talked with Ethan Kaplan, GM of Fender digital, about the company’s efforts to reach people who’ve never played music before. He told us that, despite what you may think, there are more people picking up an instrument for the first time now than ever. Why now? According to Kaplan, people appreciate music more than we have in the past. He says that music has never been more accessible, and that’s translated into a greater interest in making music.

And it’s not just guitar. Modern technology has made almost every instrument more accessible. You can play electronic drums at 2:00 AM without waking up your family, buy a guitar that fits in a backpack, or produce EDM with nothing but an iPad. It’s a great time to be alive.

Hopefully we’ve convinced you to take the plunge and pick up an instrument. Now comes the fun part: picking out your first pieces of gear and playing your first notes.

We’ll discuss the best gear for beginners, the easiest ways to learn including apps and other technology-related methods, and recommend instruments for everyone — even people who hate traditional instruments — in a follow up article soon.