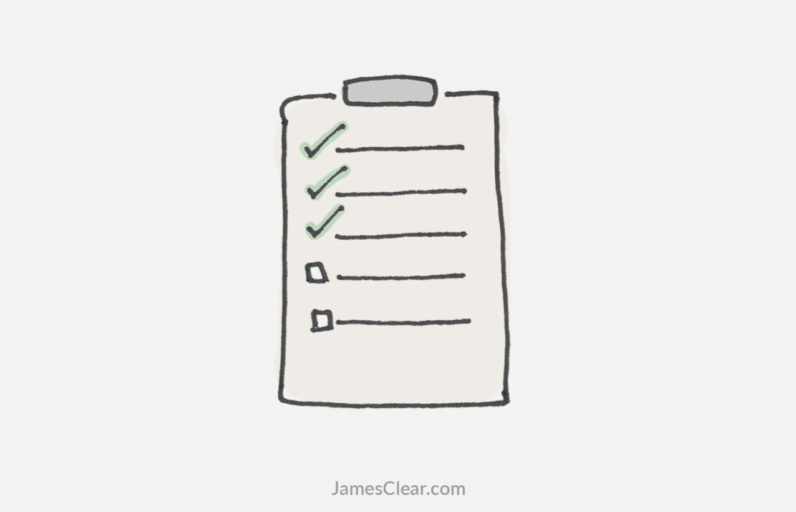 In 2004, nine hospitals in Michigan began implementing a new procedure in their intensive care units (I.C.U.). Almost overnight, healthcare professionals were stunned with its success.

Three months after it began, the procedure had cut the infection rate of I.C.U. patients by sixty-six percent. Within 18 months, this one method had saved 75 million dollars in healthcare expenses. Best of all, this single intervention saved the lives of more than 1,500 people in just a year and a half. The strategy was immediately published in a blockbuster paper for the New England Journal of Medicine.

This medical miracle was also simpler that you could ever imagine. It was a checklist.

The Power of Never Skipping Steps

The checklist strategy implemented at Michigan hospitals was named the Keystone ICU Project. It was led by a physician named Peter Pronovost and later popularized by writer Atul Gawande.

In Gawande’s best-selling book, The Checklist Manifesto (audiobook), he describes how Pronovost’s simple checklist could drive such dramatic results. In the following quote, Gawande explains one of the checklists that was used to reduce the risk of infection when installing a central line in a patient (a relatively common procedure).

On a sheet of plain paper, [Pronovost] plotted out the steps to take in order to avoid infections when putting a line in. Doctors are supposed to (1) wash their hands with soap, (2) clean the patient’s skin with chlorhexidine antiseptic, (3) put sterile drapes over the entire patient, (4) wear a sterile mask, hat, gown, and gloves, and (5) put a sterile dressing over the catheter site once the line is in. Check, check, check, check, check.

These steps are no-brainers; they have been known and taught for years. So it seemed silly to make a checklist just for them. Still, Pronovost asked the nurses in his I.C.U. to observe the doctors for a month as they put lines into patients, and record how often they completed each step. In more than a third of patients, they skipped at least one.

This five-step checklist was the simple solution that Michigan hospitals used to save 1,500 lives. Think about that for a moment. There were no technical innovations. There were no pharmaceutical discoveries or cutting-edge procedures. The physicians just stopped skipping steps. They implemented the answers they already had on a more consistent basis.

We have a tendency to undervalue answers that we have already discovered. We underutilize old solutions—even if they are best practices—because they seem like something we have already considered.

Even more critical, just because a solution is implemented occasionally, doesn’t mean it is implemented consistently. Every physician knew the five steps on Peter Pronovost’s checklist, but very few did all five steps flawlessly each time.

We assume that new solutions are needed if we want to make real progress, but that isn’t always the case.

Use What You Already Have

This pattern is just as present in our personal lives as it is in corporations and governments. We waste the resources and ideas at our fingertips because they don’t seem new and exciting.

There are many examples of behaviors, big and small, that have the opportunity to drive progress in our lives if we just did them with more consistency. Flossing every day. Never missing workouts. Performing fundamental business tasks each day, not just when you have time. Apologizing more often. Writing Thank You notes each week.

Of course, these answers are boring. Mastering the fundamentals isn’t sexy, but it works. No matter what task you are working on, there is a simple checklist of steps that you can follow right now—basic fundamentals that you have known about for years—that can immediately yield results if you just practice them more consistently.

Progress often hides behind boring solutions and underused insights. You don’t need more information. You don’t need a better strategy. You just need to do more of what already works.

Read next: AT&T's Flying COW isn't what you think it is (thank goodness)