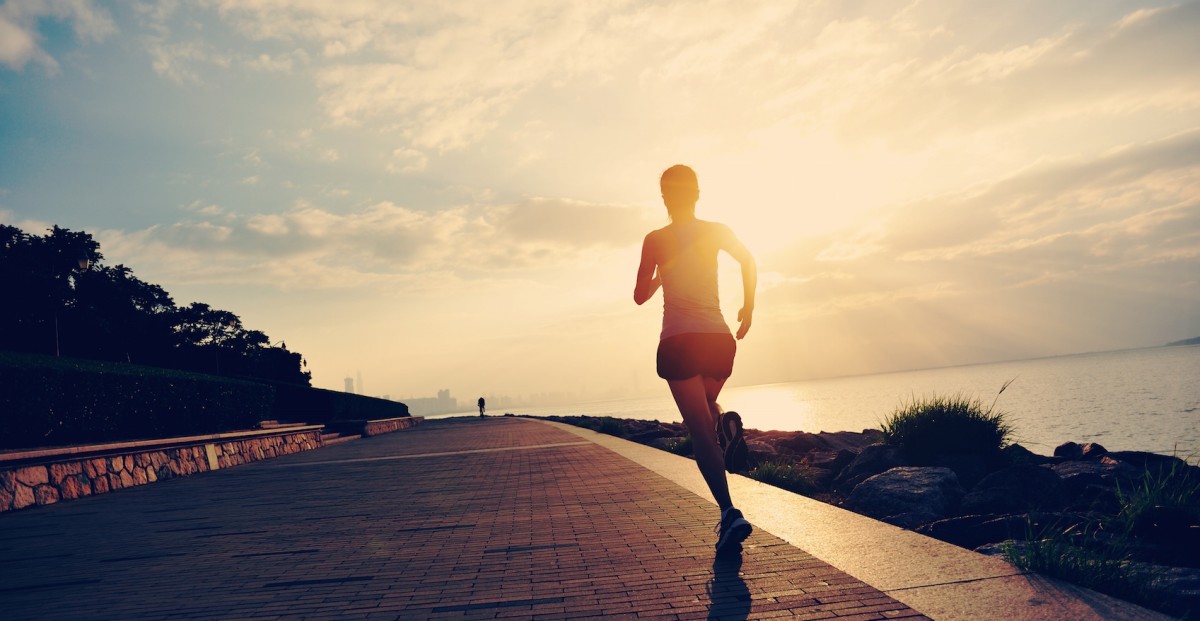 Starbucks President Michelle Gass wakes up at 4:30 a.m. every morning to run. Vogue editor Anna Wintour is on the tennis court by 6:00 a.m. every morning before work. Richard Branson, founder of Virgin Group, frequently starts his day with a morning run.

What do these highly successful people know that we need to know? People who exercise are more productive.

Why are people who exercise more productive? Because the benefits of exercise extend far beyond fitting into your skinny jeans or slacks from five years ago. (NOTE to Carson: what do guys call the pants that used to fit them?!)

Here are the six reasons why exercise not only improves your health, but also supercharges your personal productivity and your work day.

Exercise keeps you alert and focused

Here’s a quick science lesson: Exercise increases blood flow to the brain.  And that sharpens your awareness. A study by Jim McKenna from the University of Bristol showed that after exercising, work performance was consistently higher as shown by better time management and improved mental sharpness.

A client of mine recently experienced this during a weeklong leadership development program. As part of the program, participants, including my client, started the day early with exercise – yoga, walking, or strength training.

My client told me that after a few days of ‘working out’ early, the participants were more focused and engaged; they did not experience the 2pm afternoon slump; and they retained more concepts compared to another class participating in the exact same program only without the morning exercise. Exercise improves your alertness, focus and ultimately improves your job performance.

Exercise will kick up your energy level

There are days when the last thing you want to do either early in the morning or at the end of a long workday is exercise. Who has the energy? It sounds counterintuitive, but choosing to exercise in either of those instances can give you that energy boost you need. Another quick science lesson: Exercise enhances your body’s ability to transfer glucose and oxygen throughout your brain and body, thus increasing your energy level.

In a University of Georgia randomized controlled trial, researchers split people into three groups – low-intensity, moderate-intensity and a control group (no exercise). During the six week experiment, both exercise groups reported growing levels of energy compared to the control group. And, the good news, the low-intensity group reported less fatigue than the moderate intensity group.

So, you do not have to engage in intense CrossFit classes to gain the benefits of exercise. Low-intensity exercise like walking and strength training work just as well. Your energy level is the foundation that determines how much you can get done in the day, so get moving if you want to complete your next project quickly.

As a knowledge worker, your brain is your single greatest asset. It is the primary tool you use to perform at your job and you want it to be sharp. According to John Medina, author of Brain Rules, people who are physically active score better on cognitive tests than people living a sedentary lifestyle. In a clinical trial run by the Body-Brain Performance Institute in association with Swinburne’s University and Brain Sciences Institute, there was a clear link between physical fitness, brain function and reduced stress levels at work.

Paul Taylor, who led the research, said that there was a marked improvement in the employee’s mood and cognition from the exercise group with the exercising group showing a four percent increase in overall brain function. When your brain is performing at full capacity, you can focus, concentrate, and make better decisions, all essential if you are going to be more effective and efficient.

Exercise can spark a breakthrough idea

Stuck? Stalled? Wrestling with the same problem for over an hour? Go take a walk. A study in the Journal of Experimental Psychology demonstrated that walking indoors and outdoors triggered a burst in creative thinking with the average creative output rising 60 percent when a person was walking. When I was writing my book, I would sometimes hit a wall where I could not clearly articulate an idea.

In that moment, I chose to walk around my neighborhood, take a couple trips up and down my stairs, or move around my office. It was like turning on the lights; As soon as I started moving, a fresh idea emerged. So, the next time you get stuck, get moving to get your creative juices flowing.

Exercise can help you find your optimal work-life balance

Think that after-work workout session is just another item to cross of the already-busy-day’s to-do list? Think again. In an article in the Harvard Business Review, people who managed to stick with their regular exercise routine experienced less trouble finding an optimal work-life balance, possibly because structured activity helped them become better at time management and more confident in their ability to pull off the demands of both work and home.

Don’t let exercise be the first thing you eliminate when you are feeling the crunch because it might be what need to maintain your balance and sanity.

Exercise helps you learn how to work through discomfort

I have always loved to run, and I had the privilege of running cross country in college. During my four years, there were many workouts and races where I was very uncomfortable and the only thing that did not hurt were my eyelashes. It was in those moments that I learned to continue to breathe and work through the discomfort. (Which was how I realized that my eyelashes were frequently not in pain and I could think about them for a few seconds.)

Now, as a business owner, wife and mother, I am often uncomfortable as I struggle to learn something new, grow the business and try to balance my work with my family, friends and community involvement.

When you exercise, you are uncomfortable; but, you keep going. You walk to the end of the street, you do another rep or you run just one more minute. Being productive and getting work done at times is just really about pushing yourself to finish that sentence, make that phone call and be slightly uncomfortable. Exercise trains you on how you choose to work through discomfort.

Exercise is the secret sauce of highly effective, productive people.

When TV hostess and media mogul Martha Stewart was asked how she manages to accomplish so much during a day, she responded by saying, “I used to get tired before I started working out on a daily basis. Even a half hour makes a huge difference to the body’s energy level over the course of a day.”

Choose to supercharge your energy level today, and you’ll supercharge not only your productivity, but also your impact at work and home.

What You Can Do Now To Incorporate Exercise into Your Life

Read Next: The 4 types of productivity