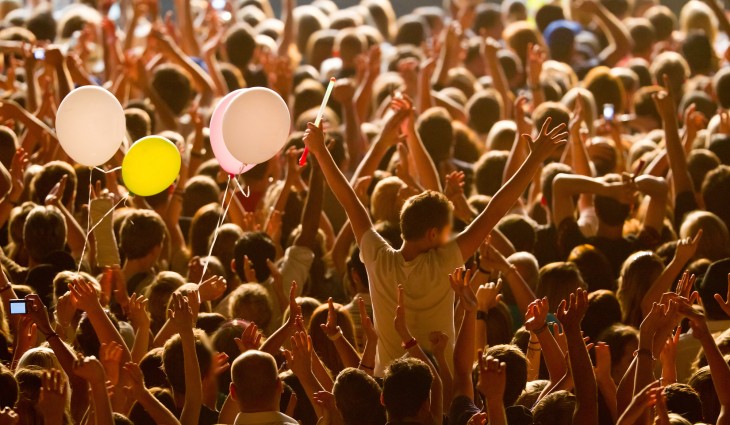 Bob Horan creates video and motion graphics content at Ticketleap. You can read occasional things he says on Twitter or look at things he eats on Instagram. This post originally appeard on his Medium blog.

Here at Ticketleap we have a really strong belief in something. We believe it so damn hard that it basically fuels everything we do. We say it all the time:

Experiences are greater than things.

For us, it’s a truth. It’s so easy for us to say, but quite frankly, it’s hard to explain. We love events. And events are planned experiences. But why are experiences so great? What is an experience? What do they mean??

My god, are we even here right now?!?

Whoa. Reign it in.

Clearly it’s a lofty concept to grasp. But, for an event creator, understanding the meaning of experiences could help you turn a forgettable event into a transforming one.

And in terms of just, you know, being a person, experiences are what make up our lives. So being able to understand them? Well, that could bring meaning to your life. Maybe that sounds overly dramatic to you, but to us, that’s something worth exploring.

Taking a look back into what’s now referred to as Event Studies, we find anthropological research into human rituals. In 1969 an anthropologist named Victor Turner took an existing ritual theory and described something he observed as “Communitas.”

You see, there are stages to a ritual. It begins with being separated from the normal, then there’s a transition into another realm of being, and ends with the reincorporation into everyday life.

Turner found that when people are together, and they make that transition into this “new realm” then they suddenly have something very unique and special in common. A togetherness is formed and this is called “Communitas.”

People experiencing the same event, at the same time and in the same space, are in that sense “equals.” This has tremendous binding power.

There’s been a lot of research that supports the existence of these “Communitas,” but you already know that they are real. They’re experienced all the time. High-fiving the stranger next to you at your team’s sporting event. Soldiers returning from war that feel closer than brothers. The entire Breakfast Club for God’s sake!

Shared experiences have the ability to fuse people together, sometimes people who wouldn’t have even made sense together outside of that context. Simply put, that’s powerful.

The final stage of this process is called Reversion. When a ritual, or an event, comes to a close the participants must revert back to normal life. An individual goes from a special state to an ordinary one.

For a planned event experience, you want people to feel a sense of change here. If there isn’t one then the experience was neither special nor memorable. These feelings can range from accomplishment to renewal to even loss.

Imagine the feeling of missing colleagues and friends after a conference. That’s the loss of “communitas” and is what drives people to attend future events. These feelings are what bring meaning to the experience. They enrich our lives and the feeling is addictive.

It’s the reason planned events exist. We seek to escape the ordinary and we crave unique experiences with others. As humans, we always have.

Sure, social experiences can happen whenever and wherever people are, but…

…planned events exist solely to facilitate these types of experiences. A planned event is a way to control them. Perhaps it sounds ridiculous to try and invoke scientific theory in order for you to improve your class at the local rec center on the art of pickling vegetables.

But meaning can be found in every event.How meaningful depends on the manner in which people are involved and engaged. No matter how small, an event experience has the power to engage people, let them escape the ordinary, and build relationships.

Meaningful experiences are what make up a meaningful life. And we see no reason why at least one of them can’t be that vegetable pickling class.