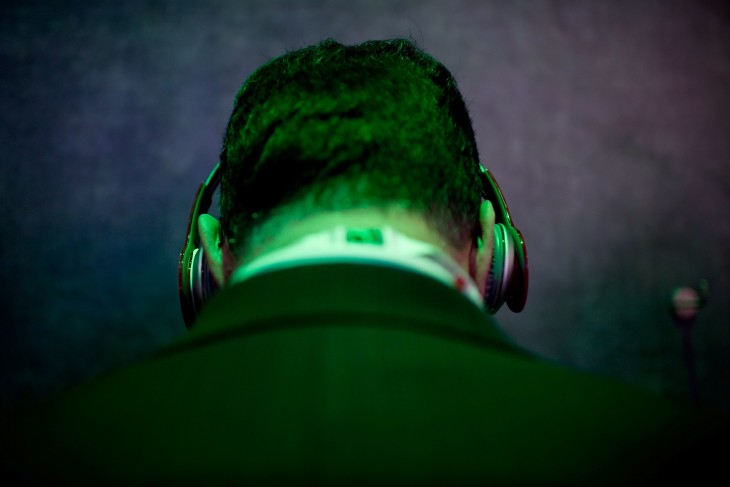 Damn. I forgot my headphones.

Nothing has a more negative impact on my day than showing up to our office without them.

Like most people, music is a huge part of my life and my tastes are constantly changing based on how I feel or what I’m doing.

I listen to the most music while I work, sifting through playlists, from jazz, to indie pop, to electronica, on what seems to be a never-ending search for the perfect tunes to keep me in the zone.

When I looked back at all my favorite playlists, I wondered what effect music has had on my work and more specifically, which types of music have had the most impact.

I thought it’d be interesting to take a dive into the science behind the deep power of music to find out if it actually helps you work better.

Why you love music

Whether you’re listening to the driving beat of a Daft Punk song or the opening chords of a mellow Jack Johnson track, both have an effect on your brain that is not seen in any other animal.

This pathway in the brain is called the Reward System and Dopamine is strongly associated with it.

Dopamine is the same chemical that gets released when you eat your favorite food or when you get a new follower on Twitter, causing you to want more, more, more.

This is why Dopamine is also responsible for the saying:

The amount of dopamine that gets released and the feelings of pleasure we get from it are also largely dependent on the element of surprise.

For instance, when you stumble upon a new song that you love, more dopamine is released and you get even more excited than if you were to listen to one of your favorite songs that you’ve heard multiple times.

Music was meant to keep you alive

From the perspective of evolution, there’s something deeper about why you feel pleasure when you listen to music.

Neuroscientist and musician Jamshed Bharucha noted that creative domains, like music, allow humans to connect in a synchronized way, helping us develop a group identity and makes us more likely to work together – which was an immensely important advantage for keeping the human species alive.

This development of group identity through music was seen in a recent study of preschool children.

The study paired children together in sets of two and showed them toy frogs. The researchers said these toy frogs needed to be woken up by either a song or exercise.

Psychologists then split the children up into two groups of 24 sets of children.

One group sang a song as they walked around a collection of toy frogs while the other group walked (or crawled) around a separate set of frogs without any music:

The researchers noted if the two children paired together would help each other to pick up the marbles.

The results of the study showed that children who sang the song together, were more cooperative in helping to clean up the marbles.

The researchers concluded that music may have evolved as a way of fostering a sense of community and developing immediate empathetic concern.

Music’s power is deeply rooted in our brains and developed out of a need to empathize, create harmony, and more importantly, survive.

Does listening to music actually make you better at your job?

Music has a powerful relationship to our primal need of connecting with others, so how does this translate over to listening to music while you work?

If you’re not looking forward to cleaning out your email after getting back from a vacation or filling out that nasty excel spreadsheet at the end of the month with your finances, music can help.

Because listening to music you like is pleasurable, it will not only make the task seem more fun but as research shows, it can actually help you complete the task faster.

In a study published in the journal of Neuroscience of Behavior and Physiology, it was found that a person’s ability to recognize images, letters, and numbers was faster when rock or classical music was playing in the background compared to when there was no music.

So whatever type of music you like, as long as you’re listening to something, you’ll enjoy repetitive or boring tasks more and get them done faster.

Press pause when learning something new

When you’re presented with new information that’s complicated, it takes more focus and mental energy for you to grasp and apply that knowledge.

For instance, if you’re learning how to drive a stick shift car or writing your first lines of programming code, it’s best to shut the music off.

In 2010, researchers at the University of Wales Institute showed that when adults were asked to complete a relatively complex task of recalling a series of sounds presented in a specific order, their performance decreased while listening to music.

The study concluded that your ability to learn something new that is cognitively demanding decreases when you listen to music.

So when you’re tackling something new and complex, put your headphones down and learn without distraction.

If you’re good at what you do, music works

The magic of music comes into play the most when you’re an expert at what you do, even if it’s something as challenging as surgery.

A study in the Journal of the American Medical Association reported that surgeons worked more accurately when music they liked was playing in the background (music that they didn’t like was second best, and no music was least helpful of all).

If you’re working on something that you have done many times before, even if it’s complicated, your performance can increase and errors become less likely when you listen to music you like.

The perfect mix tape: How to use music to create flow

While musical tastes vary greatly, listening to your favorite type of music, whatever it is, lowers feelings of tension.

Author Stephen King said that he preferred to work while listening to hard rock music (which for some of us, would be too noisy to concentrate on anything).

Whether it’s hard rock or acoustic jams, as long as the music makes you feel like doing things that’s what you should choose to listen to.

If you’re listening to new music (especially with lyrics) while working, your brain may release too much dopamine especially if you find a song you love.

You’ll start to focus more on the music rather than the work you’re actually trying to do.

When you learn something new, dopamine levels increase and can cause you to lose focus and interest in your work because it’s not as interesting (and therefore not as pleasurable) as the new song you just discovered.

Stick to your favorites list when you work but, if you must have something new, play songs that have little or no lyrics.

There are a few types of music that have proven to be effective in establishing flow for most people.

Classical or instrumental music has been shown to enhance mental performance more than music with lyrics.

For strong focus, music that has little variety and little to no lyrics are best.

Tip: For creative tasks, the noise from a coffee shop can be enough to do the trick says a study published in the Journal of Consumer Research. Moderate background noise (about the volume of a vacuum cleaner) can create enough distraction to allow you to think more imaginatively. To re-create the sounds of a coffee shop, try Coffitivity:

While music helps you breeze through simple tasks and things you are well-trained to do, when it comes to taking on something new that’s challenging, it’s best to ditch the tunes until you know your stuff.

Everyone’s experience of music is different but now that you understand the why and how of its effects, hopefully your quest for creating the perfect playlist will be much easier.

Read next: Groupon launches self-service Deal Builder for 'almost' all local US merchants