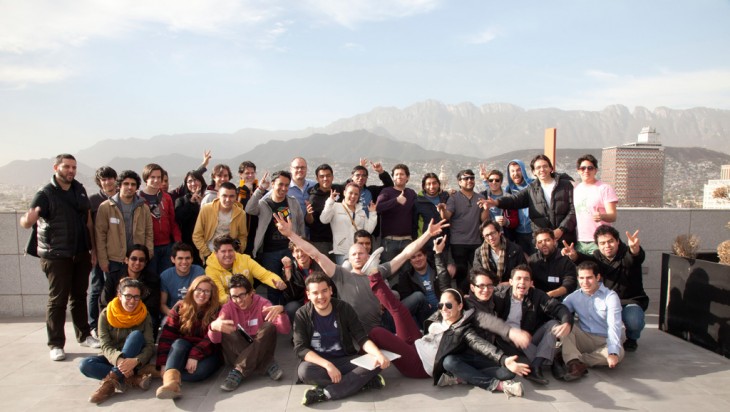 If you were at SXSW earlier this month, you probably noticed the presence of a large group of young and passionate Mexican techies. What you may not know is that they spent the three previous day hacking while traveling by bus.

In 2012, we already reported on the first edition of StartupBus Mexico, which was the only cross-border bus to join StartupBus’ journey and hackathon to SXSW Interactive and to compete with American “buspreneurs,” as they are called.

This year’s itinerary took the Mexican participants from Mexico City to San Antonio, where they joined the the other buses for the StartupBus Buspreneur Battle at Rackspace’s headquarters before continuing their trip to Austin.

According to Eoin McMillan, who conducted the Mexican group in 2012 and got on the bus again this time as a participant, one of the lessons learned last year was that the lack of reliable Internet connectivity made it difficult to work on the bus itself.

StartupBus Mexico’s group consisted of 38 people: 35 Mexicans, one American, one Australian and one Dutch guy. Here are the seven teams they formed during the journey, as listed by StartupBuzz:

– chromatix, a mobile app for discovering shopping items based on the colors you capture with your smartphone camera;

– Cloudspotting, an app that lets you share pictures of clouds in the sky and then use your imagination to draw whatever shapes you interpret;

– Emplify.Us, an online platform for emerging and passionate people looking to work on meaningful projects;

– eventee, an app that allows users to upload, share photos, videos and comments in real time from any any event to the same timeline;

– FitChallenge, a mobile app that enables people to find fitness training partners. It also works for challenging someone in your friend list to a fitness showdown. The team made it to the semi-finals after building two working apps in three days.

– Payvine.net, aimed at providing freelance workers, independent contractors and small business owners with a customizable page that allows them to personalize the payment experience;

– uSupply.Me, a platform that lets companies post what they want to buy so that they can have dozens of suppliers offer them the best deals.

Meet the finalists: Cloudspotting and uSupply.me

Out of the seven teams that made it to the final pitch session at Rackspace’s HQ, two were from StartupBus Mexico: Cloudspotting and uSupply.me.

Cloudspotting was co-founded by Luis “Lulo” Lopez, whom you may remember as the CEO of the music show crowdfunding platform Bandtastic. In the deck he used for his pitch, he highlighted the simplicity and beauty of Cloudspotting’s concept in one slogan: “The sky is your canvas.”

While it is too early to tell what will happen to Cloudspotting now that the event is over, it definitely attracted lots of attention at SXSW, and it will be interesting to see if it can leverage this impressive early traction to turn into a durable product.

uSpply.me also has the potential to be here to stay, and it was founded with this purpose. According to its co-founder, Elias Shuchleib, it was founded by a team of four: three hustlers and one hacker (the youngest of all the StartupBus participants).

“This led us to think thoroughly on the business model,” he told us, adding that the team had big ambitions. “We did not want to create just a Startup or a Product, but to explore new possibilities so this project could be also a game changer.”

One thing is for sure, uSpply.me’s pitch was very articulate. Here’s the presentation video it released during the competition:

According to Shuchleib, being among the finalists helped the team receive recognition for its work from people like Robert Scoble, Dave McClure, and Brad Boyer. More importantly, uSpply.me won’t stop operating after the event, and its founders are now working on promoting its product to Mexican buyers and suppliers, starting with the construction sector.

Business opportunities aside, Shuchleib saw the finals as an opportunity to put Mexico on the map:

“The best part [was] to be able to represent our country as a relevant flow of talent regarding technology and business management. Mexico is a country that is up and coming, we are creating new points of view on old models, and innovating them. There are no words to truly describe this opportunity, it was amazing.”

While only three made it to the finals, eliminated teams consistently helped each other, leaning in to support the finalists when necessary. According to McMillan, the skills level of the participants was striking – rather than running several buses, the organizers had chosen to raise the bar on the selection.

It’s also worth noting that the buspreneurs could get support from freelancers all around the world thanks to sponsoring from the specialized marketplace Elance. This is what McMillan and his team did for their product, Payvine, which aimed to connect identity with payment with a mash-up of About.me and PayPal.

While it didn’t make it to the finals, McMillan acknowledges that teams who won were the most deserving ones, based StartupBus’ expectations. “More than a hackathon, StartupBus is a business competition.” In other words, it was necessary to have a working product with some traction to leapfrog the competition.

Emplify.us didn’t win either, but its co-founder Steven Zwerink still sees StartupBus as “a life-changing experience that teaches you the basic elements of true entrepreneurship”:

“You learn about the real you. How do you perform under pressure, how do you work in a team, are you a true leader, how good are your design / development / business skills. Thanks to this three day pressure cooker your life will change for the better and you will exit the bus as a better person ready for anything life throws at you. Quoting Startupbus founder Elias Bizannes: ‘Think of the Startupbus as a foundry. Raw material goes in and polished and shining material comes out. ‘.” 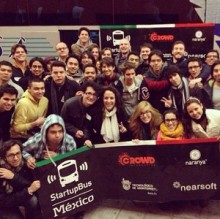 According to Zwerink, StartupBus Mexico’s teams quickly won the respect of fellow SXSW participants. “Two buspreneurs from Mexico actually found their new employers just by walking around on the job-fair sharing their Startupbus experience after being identified by their badge,” he told me.

Hard work and motivation aside, Mexican buspreneurs also consolidated its reputation for having lots of energy and passion, as Cleveland-based entrepreneur Zack Price detailed in a blog post about his “new familia.”

McMillan has big expectations for the next edition of StartupBus Mexico: “Last year, Mexico was a wild card. It has now progressed to being a serious contender, and next year I expect we will be at least in equal position to win.” If you wonder why he says “we,” his answer is simple: “I would never choose another bus.”

If you are keen to get on a bus as well, stay tuned: we are hearing rumors that there might be a StartupBus to TNW Conference Latin America in Brazil next August.

Read next: An in-depth look at Start-Up Brasil