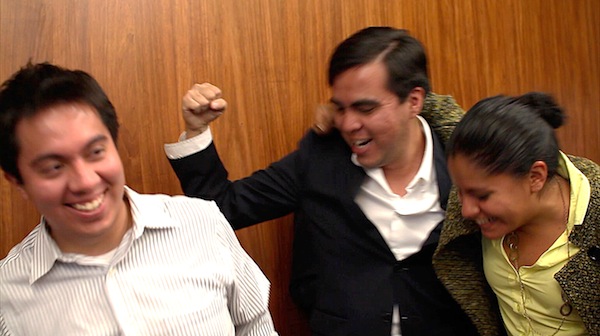 Seven finalists pitched on stage at the EGADE Business School, Mexico City, at the Startup World pitch competition, Thursday. The winning startup with the highest score, as picked by the judges, was Modebo.

Founders José Rodríguez, Marisol Contreras, and Antonio Bojorges screamed with joy when it was announced they beat off stiff competition and named Mexico City’s 2012 Winner. They will now be invited to Silicon Valley to pitch in the Startup World grand final in 2013. Contreras said ‘Its was due to the shared love and passion for their technology that kept the co-founders working together to make their startup a success.’

Over 250 startups applied for South America and only seven were chosen as regional finalists to pitch at the event in Mexico City, these included  NuFlick, Creativo Latino, Caras Politicas – , Bandtastic,  Torneo de Ideas, Modebo, School Control,  and Noknoker who was unable to compete due to their car breaking down.

The event would not have happened without our on the ground partners María Fernanda Legaspi Yáñez and Chio Paniagua and venue and media partners; Instituto Tecnológico de Estudios Superiores de Monterrey campus Santa Fe and technology blog Emprende.

Read next: Apple comments on text message spoofing, points out limitations of SMS and benefits of iMessage