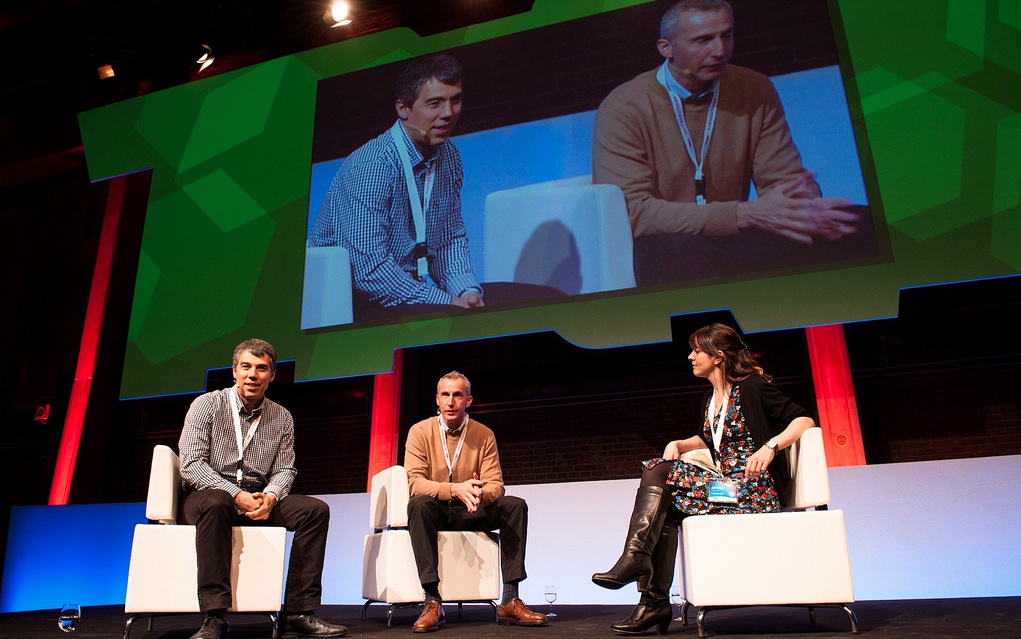 With less than three months left to The Next Web Conference Latin America, we help you get ready with a new post series that will bring you everything you need to know about this exciting region.

A speaker at the latest TNW Conference in Amsterdam last April, Miami-based angel investor Marco Giberti is always helpful when it comes to shedding light on entrepreneurism in Latin America. Besides his activities as the President of Reed Exhibitions’ Latin America division, he is also an entrepreneur himself, and a key figure of the regional tech scene.

As a growing number of investors are showing interest in this exciting market, we decided to ask him a few questions about the latest trends in the Latin American startup world.

Anna Heim: How do you feel about the current state of Latin America’s startup ecosystem? What has changed over the last few months?

Marco Giberti: Well, I’m really glad about the overall startup scene in Latin America. A lot of positive things are happening in terms of new entrepreneurs doing very creative ventures, and a new generation of angel investors is emerging.

We are also seeing new early stage VCs, who are basically guys like me who “did it” before and are now coming back and trying to help and accelerate entrepreneurs in Latin America, which I think is a very healthy opportunity. I was recently watching presentations from Kaszek Ventures; as you may know, it was founded by Nicolas Szekasy and Hernan Kazah, and it’s amazing to see these two MercadoLibre guys coming in with a different hat and a different role helping young entrepreneurs. [See our article, ‘Kaszek Ventures backs Chilean startup ComparaOnline‘.]

This is also what I am trying to do at my level. I am 45, which means I am in the middle – a good place to support young entrepreneurs with angel investment in partnership with other angels, while helping them link with VCs and potentially with private equity funds.

AH: Are you seeing any hubs emerge?

MG: I’m glad to see the ecosystem working really well in different places – not only cities like São Paulo or Rio de Janeiro in Brazil, which are very interesting destinations, but also in other locations. For instance, there are interesting initiatives in other Brazilian cities such as Recife, with Porto Digital [see our previous article].

Brazil aside, Buenos Aires is of course very interesting; it has a huge entrepreneurial ecosystem with accelerators, universities and very successful entrepreneurs. You can also see similar trends in Chile, with Start-Up Chile, as well as in Colombia and in Mexico.

AH: I assume there are still challenges?

That’s one point on which I am trying to help, together with different entrepreneurs, angels and accelerators from Miami. We have a small group of people who are very focused on helping entrepreneurs who have already gained traction in Latin America to escalate to other regions in Latin America, and also to roll out into the US Hispanic market here in the US.

We see a tremendous opportunity in doing that – it brings a huge amount of added value to the entrepreneurs and investors. As you may know, rolling out in Latin America isn’t as easy as it sounds. It’s actually extremely challenging and expensive, so if you can work with good angels and the right local partners, the efficiency, the speed and the rate of success are significantly higher.

That’s why we want to create some sort of a network between entrepreneurs, angels, and accelerators – and hopefully facilitate rollout opportunities and provide help both to the entrepreneurial and to the investment sides.

AH: What is the timeframe for this network to take form?

MG: It is already starting to happen in a way; all the conferences and regional events are a fantastic chance for us to network. The first edition of The Next Web Conference Latin America itself will be a great opportunity for entrepreneurs from the region to network between themselves and with angels & VCs.

In terms of timeframe, I’d say it was almost non-existent a couple of years ago. During the last twelve months, this network started to connect in a much better way, thanks to some events like the Americas Venture Capital Conference here in Miami, and other regional initiatives such as the ones Endeavor has been promoting [See our previous post].

Overall, the community is maturing pretty fast, which is generating a lot of interest – and will hopefully create more success stories over the twelve to eighteen months. For instance, I expect one or two IPOs from Latin American companies over the next couple of years – Globant and Peixe Urbano being two potential names. We need more success stories like MercadoLibre in the region, because it will encourage entrepreneurs and investors to think that the exit opportunity in Latin America is real, and that’s exactly what we need.

AH: Are there any cultural challenges to overcome?

MG: First of all, the entrepreneur system needs to work in a real way, and not only on paper. Don’t take me wrong, I am not saying that what already happened isn’t real. For example, the amazing job that Endeavor did in several Latin American countries over the last decade helped young people understand that entrepreneurship was a true opportunity in the region – not only in tech, but also in many other industries.

Yet, this is only the beginning, and we now need to scale it in several ways. For starters, we need the academic community and leading universities to be working closely with entrepreneurs and forming future entrepreneurs. This means they should be launching specific programs, similar to what the University of Miami is doing with The Launch Pad. As a matter of fact, some Latin American institutions took initiatives in that respect. For instance, Argentina’s IAE Business School has created an angel investment club, and Brazil’s FGV also has interesting programs – so there are already several universities understanding that they need to help their students get the entrepreneurial culture and the opportunity it represents.

In addition to training and educating entrepreneurs, we also need to improve access to mentors, capital and expertise. In that sense, all the new angel clubs and early stage VCs emerging in Latin America are a very healthy opportunity. As I mentioned before, these initiatives come from forty-something guys like me who had a couple of interesting exits and are willing to give back to future entrepreneurs.

The third and most important element are the entrepreneurs themselves – those who have a dream and will execute it. In that respect, there’s a huge amount of fantastic talent in Latin America, so if we are able to give them academic and mentoring support, we should soon get more success stories.

AH: What do you call a success story?

MG: When I say “success story,” I am not only talking about IPOs. Early-stage exists happening in Latin America are also very interesting, and should also get more coverage in the big media in the region. That would inspire other entrepreneurs and encourage more people to quit their jobs and try something new. Still, we are starting to see this happening and get noticed, which is also why I am so happy to see The Next Web bring its conference to Latin America.

AH: I am actually surprised by your comment on media coverage; I was under the impression that Latin America’s mainstream media was talking more and more often about startups, albeit in a glamorized way.

MG: It’s true, some of the articles you see in the region are about “celebrity entrepreneurs” – and I don’t see anything wrong with that, but entrepreneurship is much more than that. We need to communicate the entrepreneurship opportunity for the masses, not for the elite.

For instance, that’s what the Brazilian angel group Anjos do Brasil is trying to do; they are trying to be angel investors for the masses, and not only for the guy who did the best MBA in the US. We need to spread out and help everyone; and we also need to generate stories about them, not only about Latin America’s wealthiest families.

AH: What segments do you find the most interesting or promising?

MG: On a personal level, I am particularly interested in startups related to new media, education and lead generation. This also has to do with my background – that’s what gets me passionate. That said, I also see exciting opportunities in healthcare – overall, I’d say education and healthcare are the hottest segments.

In addition, I am an investor in the crowdfunding platform Idea.me, a tropicalized Kickstarter clone, and they are doing a very good job [See our previous article].  I’m not one of those guys criticising copycats in Latin America, I think it makes total sense if the copycat is ‘tropicalized’ for Latin America, as I say all the time – that is to say, if it is adjusted to the local customers’ needs and expectations. When it is the case, it’s a very good thing and brings a ton of added value into the market.

AH: What about innovation though?

MG: I am not seeing as much innovation coming out of the region as I would like. Around 70-80% of the startups are some sort of copycat. That said, the remaining part is very interesting, and we will keep seeing more new ideas emerging from the region.

I also think we will see more Latin American ventures entering the US and European markets. While some Latin American entrepreneurs are still not thinking about foreign markets, and stay focused on Brazil’s or Mexico’s internal markets, we are also seeing others who are starting to see US Hispanics as a target.

AH: So you think the Hispanic segment is the best point of entry for Latin American startups keen to access the US market?

MG: It really depends on the venture, obviously, but it is the case for some of them, yes. For instance, fnbox is starting to understand it has an opportunity in the US Hispanic segment [see our article mentioning one of fnbox’s reports]. I think we will see more and more entrepreneurs thinking of US Hispanics as a target. Some entrepreneurs are even more aggressive, and want to dominate the US market as a whole from the start, both in English and Spanish.

AH: Are there specific ways to facilitate networking between Latin American entrepreneurs?

MG: Besides the networking events I have mentioned earlier, it would also make sense to have specific social networks for Latin American entrepreneurs – an AngelList for Latin America. Endeavor already has its own network, but it is closed; so I would be happy to see a regional social network for entrepreneurs, available in Spanish and Portuguese. It would be a very valuable tool and we would all benefit from it.

AH: What would be your final message?

MG: There are lots of good things happening, but we can hopefully accelerate them and see even better achievements over the next couple of years. We have to all work together to create new success stories from Latin America, that will encourage new entrepreneurs and investors to come into the market.

I also think we need to find ways to legitimate Latin America as an entrepreneurial startup community. We need to convince innovative initiatives on entrepreneurial education to come South and to create content in Spanish and Portuguese, which would dramatically expand their audience and help them reach the masses.

Read next: Oleg Kostour & Jamie Murai of Pair on funding: "We raised a little bit more than we'd expected"