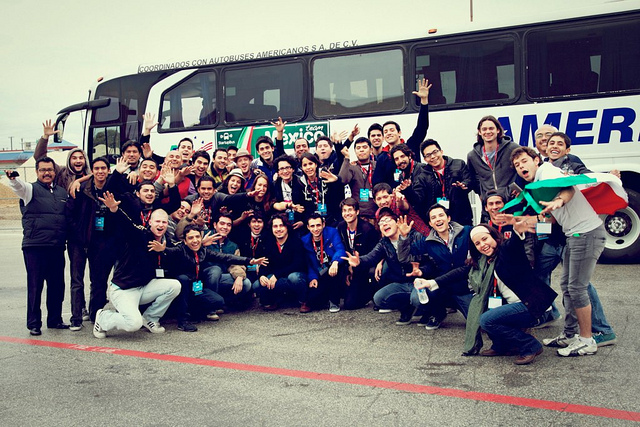 Have you ever participated in one of StartupBus‘ events? Here at The Next Web, we are big fans of this initiative, which is best described as a road trip for entrepreneurs – or better say, “buspreneurs.”

Over the last few months, we have followed StartupBus’ journey from its European expansion to the latest SXSW. It came with an interesting innovation this year; for the first time, Mexican teams took part in the competition, and their presence didn’t go unnoticed.

Now that some time has passed, we decided to ask Eoin McMillan a few questions about his unusual experience as StartupBus’ “conductor” for Mexico.

AH: How did a San Francisco-based Australian guy like you end up leading StartupBus Mexico?

Eoin McMillan: Do you remember when we asked people to vote for a new city to add to StartupBus’ circuit for 2012? Well, to our great surprise, Mexico simply smashed it. While other competing cities attracted votes from their area, we noticed that Mexico had managed to gather broader support, with many votes coming from other Latin American countries.

As I soon found out, this also had to do with the fact that the entrepreneur Francisco ‘Paco’ Viramontes and the VC fund Mexican.VC helped promote this project. Its Mexican partners Santiago Zavala and César Salazar are very well connected; they organize many activities for entrepreneurs and developers in Mexico, and helped us a lot in taking our plans off the ground.

AH: What was your exact role?

EM: It was my first year as a “conductor”, but I am a StartupBus alumnus myself, and as such, I was one of the 11 conductors selected among a team of 25 organizers to lead a regional section of the project – in my case, Mexico. That’s the way we work; next year, I will move on to an advisor role and someone else we step up.

As you can imagine, I didn’t do it on my own. Rewards.to‘s founder David Andujo was instrumental in helping us raise funds from Mexico – our Mexican sponsor was the well-known university Tec de Monterrey Zona Norte [see our previous story about Monterrey’s Startup Weekend].

As for Maria Panagua, she handled accommodation for our group in Austin. To find a place where our buspreneurs could couchsurf, she sold each of them to potential hosts as “the next Mark Zuckerberg from Mexico”!

AH: What were your impressions on Mexican buspreneurs?

EM: The group really exceeded my expectations. There were around 40 participants in total – not to mention our great bus drivers. Most of them were Mexican students from Tec de Monterrey, and they were very impressive. Interestingly, most of them were scholarship students. It’s hard to tell why – I guess they tend to be more driven.

At the same time, it also meant we had to keep the costs as low as possible for participants, which was a real challenge at some points. We had wi-fi sponsors, AT&T and TelCel, and we picked a route with wi-fi to make sure we could stay connected.

However, another problem got in the way, which was electricity. It was very hard to find a bus that could cross the border and had everything we needed, and we ended up dropping electricity from our criteria. As you know, the teams had a lot of work to do and very little time, which meant that we had to do quite a few pit stops for everyone to recharge their laptops’ batteries!

AH: When you say the teams were impressive, how well did they do in the overall StartupBus’ competition?

EM: All I can say is that the teams ticked all my boxes! Out of the 7 teams created on the bus, Glassroom.mx made it to the semi-finals and got some coverage in Mexico. As for SpottApp, it even made it to the grand finale. There were several other cool teams, for instance BunchofLocals, Skilltrip and Pirate Deals.

AH: Can you remind us StartupBus’ general objectives?

EM: StartupBus uses the hackathon format, and encourages participants to build startups in three days – but it’s not its ultimate goal. In reality, it is a vehicle for entrepreneurship; there’s a lot of pitch training and iterating through the thought process they need to launch a business. The constrained space also makes it very effective, because it means that conflicts have to be solved very fast.

We also have to be selective – we can’t take everyone, and we interviewed a lot of people. The site itself as a huge filter. In summary, what it says is: “If you are not the best of the best, do not apply.”

AH: This approach can sometimes create a barrier for female applicants. How was the gender balance on StartupBus?

EM: Overall, we have seen an uptake in female representation, and some great female-led teams, such as Adventeur and Curious City. In our Mexican bus, we didn’t have many women because not many applied, but those who did were amazing. We also hope to work with [Women 2.0’s platform for Spanish-speaking countries] Ellas2.0 in the future.

AH: What’s next for StartupBus in Latin America?

EM: We might see a Mexican expansion next year. Even this year, participants came from all regions, and our route took us from San Luis Potosi to Austin via Saltillo, Torreon, Chihuahua, Ciudad Juarez and El Paso.

Beyond Mexico, we also have plans to expand to other Latin American countries – I can’t reveal all the details yet, but stay tuned for more info! I can already tell you that I’d love to see a bigger Latin American presence. I may sound like a cliché, but I was very impressed by their energy. Beyond that, they also have a great knowledge of their local market, and they can create projects to take it.

More generally, I think the future of the tech ecosystem is global. With infrastructure and broadband catching up, it is much easier for people in emerging countries to participate in it. Apart from cultural differences, I’d say nothing is holding them back – and unsurprisingly, they start to have a few success stories to look at. For instance, if you look at 500 Startups’ latest batch, you’d be impressed by the number of non-US teams.

AH: We have written quite a bit about these cultural barriers in Latin America – for instance the taboo of failure and the excessive fascination with Silicon Valley. What are your personal impressions?

EM: As a foreigner, I don’t want to sound judgmental. What I heard from the teams is that there is a culture of trying to impress, while it is actually very important to acknowledge what you don’t know if you want to learn.

There is also a huge gap between those who have already attended a Startup Weekend and those who haven’t. I was very impressed to see the difference it made. It’s hard to explain, but the first ones had their ‘entrepreneur brain turned on’. They also knew basic tools that the others had never heard of – in answer to that, I have created a small list of resources that every entrepreneur should know.

Overall, I felt very proud to help bring the entrepreneurship culture to this great group. The other buses also noticed their level of energy, and I think they made great ambassadors for their ecosystem.

What do you think is needed for the Latin American tech scene to boom? Let us know in the comments.