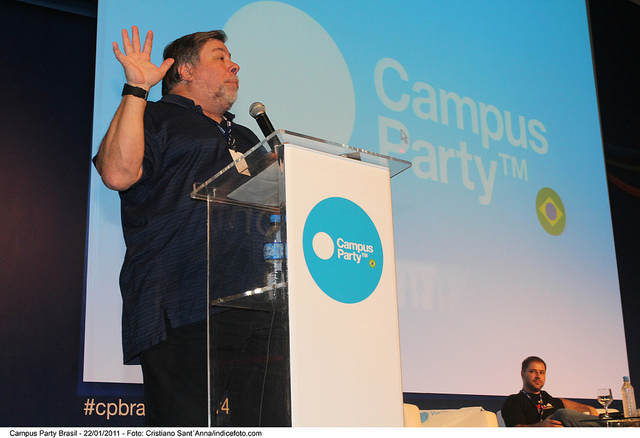 Have you ever attended a Campus Party? If not, let’s hope you’ve already signed up for Sao Paulo’s. Although there are six days left before the event, which will take place from February 6th to 12th, it has been fully booked for quite a while.

This has little to do with limited space capacity: now in its fifth edition, Campus Party Brasil (#CPBR5) will take place in an even larger venue this year, Sao Paulo’s huge Anhembi Park.

Those of you who are familiar with the Campus Party concept know why it needs so much space. First launched in Spain in 1997, the event series gives thousands of geeks and hackers a chance to spend several days together – while camping on-site.

As for the curious, they can also visit the free-access Expo Zone and sleep in the comfort of their homes. Although they’ll obviously miss part of the fun, it is also a great opportunity for those who aren’t familiar with technology to get a ‘digital baptism’.

Organized by Futura Networks and sponsored by Telefonica, the event has branched out to other countries since 2008, including Colombia, Mexico and Ecuador.

Since its launch, Campus Party’s largest global event has always been its Brazilian edition. In 2012, it will welcome 7,000 participants and expects 200,000 visitors – not only because Brazil is a huge country, but also thanks to an impressive line-up.

To give you an idea, confirmed speakers include Wikimedia’s head of business development Kul Wadhwa, who will talk about Wikipedia and SOPA, Rovio’s product manager Julien Fourgeaud and Soundcloud’s business development VP Dave Haynes. The agenda also includes interesting albeit lesser known names from civil protest movements such as Occupy Wall Street, as well as Brazilian musicians and personalities.

Conferences are only some of the many activities that will take place during the event, such as a Barcamp and the gaming competition Intel Extreme Masters. According to its organizers, it adds up to 500 hours of content, from overclocking, modding and robotics workshops to social media and free software.

Activities are structured around four main poles – Science, Digital Culture, Innovation and Digital Entertainment – which all have their own series of sponsors. Entrepreneurship is also represented; besides the ‘Campus Empreendedorismo‘ section, Brazilian entrepreneurs will share the main stage with Chilean teen Sebastian Alegria (see our story ‘Meet the Chilean Teen Who Warns of Earthquakes on Twitter‘).

“Brazil is completely different from the other countries where we operate. Brazilians are crazy about learning and innovation. They also love to create startups, and Campus Party is the ideal place for that: participants can get in touch with companies and institutions that can help them get their ideas started.”

If you need a proof of it, Telefonica’s startup accelerator Wayra is organizing a special contest during Campus Party Brasil. Following a call for applications, 20 shortlisted projects will be presented to the audience and to a jury, who will pick a winner on February 11th. Besides a trip to Silicon Valley and other perks, the prize also means that this project will be automatically selected to participate in the next WayraWeek (see our previous post).

In other words, Campus Party Brasil is likely worth your time – but don’t be too disappointed if you can’t attend; we will keep you posted on interesting startups launched and created during the week. As for conferences, they will be livestreamed at http://live.campus-party.org.

It’s also worth mentioning that you may be able to attend a Campus Party near your home very soon. In 2012, the series will expand for the first time to Peru, but also to the US – according to Ruiz-Clavejo, the upcoming Silicon Valley Tech Festival will be the largest Campus Party to date.

Read next: Facebook has 845 million monthly users, and other interesting S-1 facts