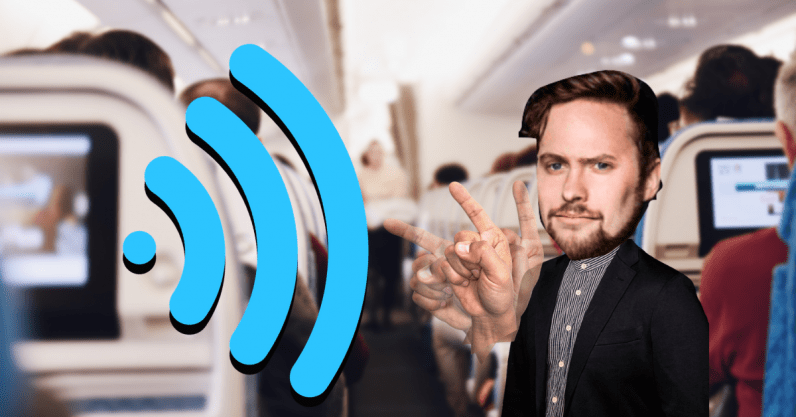 I truly don’t want to be able to go online during flights — no matter how long the flight is. This might be a controversial opinion, but hear me out before you denounce me as a backwards luddite.

First of all, I’ll admit that part of the reason is a sliver of nostalgia. I find it appealing that there’s still one place in the world — or above it — where I can’t whip out my phone and impulsively comb through social media, messages, and emails. But this isn’t merely nostalgia, it’s also about what’s good for us.

We all know the internet is pretty bad for us, despite all its wonderful characteristics. As neuroscientist and author Daniel J. Levitin has written about, constantly switching between tasks — like hopping from one app to another every time a notification pops up — can lead to anxiety and bad impulse control. Constant connection and distraction basically cause a neural addiction because our caveman brain shoots us up with ‘feel nice’ hormones whenever we check our feeds, without providing us with any real sustenance.

Airplanes are one of the last places of refuge from the internet. Being denied the constant connection we’ve grown accustomed to forces us to be in the moment every once in a while, which is something we can all benefit from.

But what if the ‘moment’ is awful?

Sure spending some time offline every once in a while might be great. Like looking up from your phone while you’re lying on a sunny beach with the warm ocean breeze caressing your face, and just be mindful of your surroundings. But being on an airplane is something that many of us don’t want to be particularly mindful of.

The seats are always too small, there’s no legroom, the air is dry and disease-filled, the food is awful, and the high-pitched cries of babies ring in your ears. The internet can be a means of escape — and some might argue flying is a horrible enough experience to warrant that.

I pondered this on a recent trip to Seoul, where I wasted away in a tiny seat for 24 hours there and back, but I’m still convinced Wi-Fi isn’t the answer. Why? Because we shouldn’t be allowed to escape this moment.

Not wanting to be offered the escape of the internet isn’t about masochism or being against technology, it’s about respecting technology (PLOT TWIST!). Airplane travel is the technological leap mankind has been dreaming about ever since Icarus flew too close to the sun. Offering Wi-Fi on airplanes is just repeating his folly.

Humans wanted to fly, and they did — through sheer willpower and countless trials and errors. So it’s truly amazing that whizzing through the air at 40,000 feet inside a massive steel bird has become so mundane that we’d rather be scrolling through Instagram or answering work emails.

Now, you might ask yourself what about the onboard distractions that are already offered during flights? Is lazily watching shitty movies like TAG on the in-flight entertainment system with stale breadcrumbs on my lap any more respectful? Fuck yes, it is.

By watching shitty movies, I avoid the constant focus-shifting and the negative psychological effects Levitin described that come with the constant connection, and I show my respect to the technical marvel of air travel by adjusting my behavior to the situation.

Believe it or not, I wouldn’t normally waste away my free time on movies like TAG (although Jon Hamm is the most handsome man on the planet), or choose to spend it in a place where I don’t have enough room to clean the leftovers of a subpar meal off of me. But by doing that while flying, I’m succumbing to the situation and acknowledging its power over me.

Mighty steel bird, you are my master.

All work and no play…

Finally, let’s say you agree with my argument — and why wouldn’t you, my logic is infallible. You might be thinking “OK, you’re right, being online during flights sucks, but just don’t use the Wi-Fi if the airline offers it.” No, not good enough. I don’t want it offered at all, because of expectations.

If having Wi-Fi onboard becomes the norm, airplanes will become like any other place. Sure we can turn off our devices, ignore work emails, and go dark on social media — but none of us have the willpower to do so. We’ll lose the excuse of being out of reach during flights because it’ll be expected that you maintain the same online presence as when you’re on the ground.

When I flew to Seoul I was forced not to do any work, so nobody expected it from me. But with the normalization of having Wi-Fi on airplanes, you can kiss binging bad movies goodbye. Instead, say hello to the incredibly awkward struggle of trying to fit your laptop on the ridiculously small tray table, while your neighbor’s elbow pokes you in the ribs, and your grandmother tries to facetime you.

So let’s just agree to keep Wi-Fi away from flying. Treat flying as an occasion, respect its achievement and the effect it has on the planet (always think about emissions, kids, it’s the least you can do). Use the few hours of disconnectedness to experience the moment and marvel at the engineering feat humans have achieved — and watch TAG.

Read next: These were TNW's favorite tech purchases of 2019