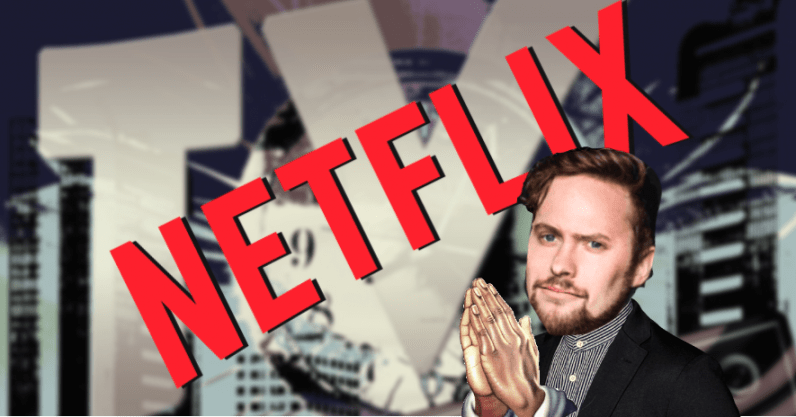 Ever since Netflix came along, TV stations have become pretty much pointless, right? I mean why go through the excruciating process of waiting a week for a new episode of your favorite show when you can simply stream the entire season in one day? While that’s a solid argument, it still comes with an awful problem: choice.

Now, you might think that “choice” isn’t much of a problem at all — but you’re wrong. With the choice that streaming services bring, comes the loss of not having to make a choice. Deep, right?

First up, I’m a rather extreme case because, growing up in Iceland, I only had one TV channel for most of my life, but my situation is still applicable and you should take my opinion as fact.

I’ll paint you a word-picture of an eerily familiar scenario. You come home after a long tiring day at work, kick off your shoes, wolf down dinner, and then firmly plant yourself in front of the screen, hoping to transcend the mundanities of daily life and be spirited into a new world.

But if you’re not currently knee-deep in binging a series, choosing the next show to watch is a pain. You see the thumbnails of series your friends have said YOU ABSOLUTELY MUST WATCH, but right now you’re not really in the mood to be challenged intellectually — it was a tough day. So you decide to definitely watch it sometime soon, and then end up rewatching The Office for the gazillionth time.

Too many options mean tough decisions, which means returning once again to the familiar and safe bosom of a long-worn out show. No adventure or new discovery. No ticking a movie off your bucket list.

And this is a problem shared by many, judging by how many people read our guide on how to find something to watch on Netflix. There’s also a TED talk on how more choice can actually not happier but more dissatisfied, so I have double proof and you have to believe me.

This talk is actually from 2005, before Netflix become the hottest streaming service in the world, but I’m gonna forcibly apply it to Netflix to make my case. Psychologist Barry Schwartz’s argument basically boils down to this: when faced with too many options, it actually produces paralysis, and even if we overcome it, we’ll be less satisfied with our choice.

Unlike watching linear TV,  streaming always puts you in the driver’s seat, forcing you to deal with the existential dread of making the right choice or feeling like a failure for having wasted an evening on The Holiday Calendar. With linear TV you might waste an evening, but it isn’t really your fault — or at least it’s easier to lie to yourself that it isn’t.

There’s so many films and documentaries I’ve enjoyed that I would never have consciously ‘put on’ Netflix, as it would’ve felt like too much of an investment. Will I really have the time and attention to sit through a two-hour documentary about the history of Italian bidets? Only the gods know. But finding it already playing when I turn on the TV is just the nudge I need. And while this isn’t necessarily the best content out there — the documentary on French bidets was far better — it does broaden my horizons.

Then there’s also all the types of shows and segments that streaming just hasn’t been able to master as of yet. Daily and deep-dive news programs, talk shows on topics such as literature, arts, niche subcultures, and shows depicting local issues and interesting tidbits. Linear TV still has these in the bag.

I’m also a relatively smart person (my mom says so), which I owe in part to all the ‘knowledge’ I’ve randomly gleaned from TV, especially when I was a kid. Every day I’d plant myself in front of the ol’ picture box and absorbed the world’s collective knowledge like a sponge.

But a lot of channels suck, right?

TV stations are of course incredibly diverse and different between countries and regions — basically, there’s a lot of crap out there (looking at you, US). There’s also an incredible amount to choose from, so mindlessly flipping through channels until I hit a rerun of The Office means I’m in the same predicament as I am with streaming. There’s also annoying ads, but that’s capitalism baby. I still maintain the linear TV viewing experience is much purer.

There’s something so beautiful about tapping into a stream of content enjoyed simultaneously by masses of people around the country, whether it’s a quality program or a disruptive ad. There’s a sense of camaraderie and companionship, as you give up a certain amount of control to join them. Instead of being a lonely, cooped-up, omnipotent streaming god, where the time of day has no meaning and all of the world’s creation is at your fingertips, you decide to acknowledge the world around you, your place in it, and all its limitations.

You might not get exactly what you wanted, but who says you knew what that was anyway? You open yourself up to discovery and new ideas as you plug yourself into a beam of emotions and a sense of time that you share with the rest of society. Basically, it keeps you anchored in the stormy seas of technological progress and societal disunity (damn I’m a good writer).

It’s all going to shit anyway

We can’t stop technological progress and backtrack to how things were — it’s simply impossible. All I’m asking is for streaming and linear TV to coexist, which might actually happen with new Netflix rivals.

One of the biggest attractions of streaming was that you’ve got all your content in one place. Just open up Netflix and binge away. But the times are a-changin’. I’ve personally now got both Netflix and Amazon Prime, and there’s loads more coming.

The introduction of Disney+ will definitely make a huge dent in the current selection of streaming services and make the streaming industry even more fragmented. And Disney+ is also going to be releasing original shows weekly, with Apple TV+ considering the same approach. So streaming is basically becoming like TV channels, just without the types of shows and sense of community that linear TV can provide.

So instead of hopping fully on to the fragmented, over-glorified streaming wagon, I dare to hope for a future where TV becomes a free and societally beneficial amalgamation of streaming and linear programming. An amplifying platform of human connectedness and a driver for world peace!  Oh, and it has to be cheap.