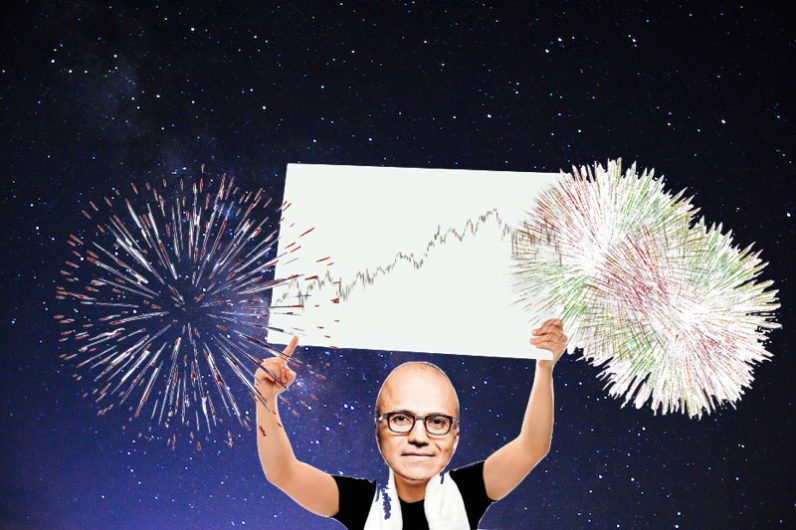 Microsoft Corporation (NASDAQ:MSFT) is set to end 2018 on a high, bumping off Apple from the top spot and becoming the most valuable publicly traded US company.

The Washington-based American multinational technology company, whose founders were Bill Gates and Paul Allen, has been a rival of Apple for some time within the computer industry. Yet, at the time of writing, Microsoft’s market cap trumps Apple’s, with a value of $840 billion, according to Yahoo! Finance. In comparison, Apple’s market cap is worth $811 billion.

As can be seen from the graph above, Microsoft ended 2017 at a close of nearly $86. Entering 2018, the chart illustrates a changeable price history for its share with every upward movement closely followed by a downward trend during the first part of the year.

At the beginning of October, Microsoft’s share price reached a high of $115, as noted from the graph above. This is followed by a downward price trend, with a few upticks before settling at its current value.

The price increase from June onwards is noted to be down to the fact that Microsoft published its Q4 findings for the year in July, indicating strong earnings for the fiscal year. According to a company statement from mid-July, it said that revenue was $30.1 billion for the quarter and had increased 17 percent.

Satya Nadella, CEO of Microsoft, stated at the time that the company had a “brilliant year, surpassing $100 billion in revenue…,” adding:

“Our early investments in the intelligent cloud and intelligent edge are paying off, and we will continue to expand our reach in large and growing markets with differentiated innovation.”

With Microsoft on its way to ending 2018 on a positive note, what have been the major news events around it?

At the beginning of the year, it was reported that Microsoft was using the blockchain as a way of storing and processing digital identity data. At the time, the report highlighted that the company was working with the Decentralized Identity Foundation (DIF) to solve some of the issues when managing personal data.

In a bid to improve Cortana’s conversational skills, Microsoft purchased an AI startup called Semantic Machines. The aim, according to a report, is to help bots talk to humans naturally, a move that comes at a time when the use of AI is steadily making its way into our homes.

Elsewhere this year, it was officially reported that Microsoft had purchased Github, a social coding platform, for a cool $7.5 million. Subject to regulatory approval, the close of the deal is expected to take place by the end of this year. However, in a more adventurous move to store and power its cloud infrastructure market, the technology company deployed a data center on the seafloor off the Orkney Islands in Scotland. The move is designed to find environmentally sustainable ways to run large-scale data management units.

Notably, in a bid to keep up with Amazon’s cashier-less stores, Microsoft is reportedly considering its own. According to a report, discussions for collaboration have been taken place with Walmart.

More recently, it was revealed that Amazon and Microsoft were working together to help Alexa and Cortana work in sync, a step designed to make the lives of consumers’ easier. And in an effort to keep people safe when people smoke at gas stations, the company has built an AI-powered alarm system. This is designed to help employees at gas stations crack down on those offending.

But with 2018 drawing to a close for the technology company, what can it expect from 2019?

According to a report from Barrons, citing information from Wedbush Securities, Microsoft’s stock will rise next year because of its Azure cloud-computing business.

Daniel Ives, the firm’s analyst said: “Our expectation [is] that the company will cross the trillion dollar market cap during 2019 based on its cloud strategy and growth.”

With Amazon showcasing a strong competitive advantage and further growth with its cloud-computing business, it’s likely that this will help to accelerate its price into 2019 and beyond. Looking at this long forecast stock price report for the company, it predicts Microsoft’s share price to close December at $115, with a steady rise over the next two years. At the close of December, 2020, it projects a share price level of $192.

It has been an interesting 2018 for Microsoft, but will 2019 deliver another impressive year for the corporation? Only time will tell.

Now that you have actionable information on the future of Microsoft, it’s time to start investing. With eToro, a leading social trading platform, you can trade manually or copy the actions taken by leading traders, taking much of the stress and work out of your investments.