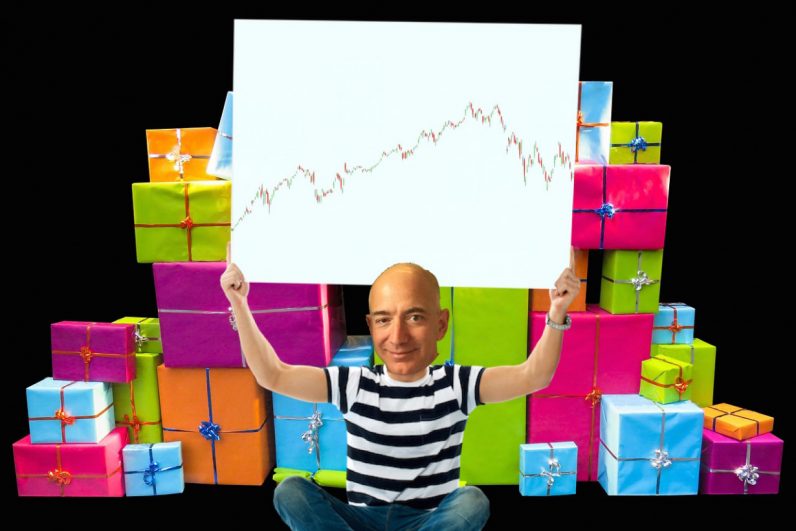 The Seattle-based American electronic commerce company, whose CEO and founder is Jeff Bezos — America’s richest as noted by Forbes —was created in 1994. Back in 1997, when it issued its initial public offering of stock, shares were trading at $18.

At the time of writing, Amazon shares are now worth $1,658, according to Yahoo! Finance. Its market cap is currently worth more than $810 billion, up from around $564 billion at the start of the year. In September, it became the second-ever publicly traded U.S. company to hit the $1 trillion mark, after Apple.

At the moment, it’s a race between Amazon and Apple as to who will claim second place before the end of the year. At the time of writing, Apple is slightly ahead with a market cap worth $811 billion; however, earlier this month Amazon was able to surpass it, briefly, when Apple lost around $314 billion following its share price decline from October, pushing it to $800 billion, according to a report from Bloomberg. Microsoft is currently in first place with a value of $840 billion.

From the chart below, the share price of Amazon closed the end of December, 2017 at $1,169. Entering 2018, it undertook an upward trend with a few price corrections in between, before closing the 4 September at $2,039.

However, from early October, as with most of the technology industry, Amazon’s share price fell sharply, settling at its current value. Yet, with the trade war between the U.S. and China appearing to ease, Katie Stockton, founder at Fairlead Strategies, which specializes in technical chart analysis, thinks that stocks may rally again soon.

Speaking on CNBC’s “Closing Bell” on Wednesday, she said she sees positive signs in Amazon’s chart. She also thinks that the commerce company has a clear buy signal, as long as it maintains its share price above that of $1,525 and $1,560.

“It’s very infrequent we get this kind of opportunities in a large-cap technology or discretionary stock,” she said. “We might look back and say it’s a missed opportunity if we didn’t take it.”

Despite the price drop in Amazon, throughout the year it has been in the news for various reasons as it continues to expand by delivering a diverse portfolio that is aiding its valuation.

For instance, at the beginning of 2018, it opened its doors to the first cashier-less grocery store, called Amazon Go, in Seattle. More recently, it was announced that the commerce company is thinking of opening 3,000 cashier-less stores by 2021, pitching it against the likes of Subway, 7-Eleven, and Pret a Manger, but with the added bonus of zero checkout queues. It’s also looking for retail space in the U.K. for its first cashier-less supermarkets.

As well as food, Amazon is stepping into the healthcare industry. Earlier this year, it was reported that Amazon was teaming up with Berkshire Hathaway and JPMorgan Chase to address healthcare for their U.S. employees. Whereas, in more ambitious reports, it’s suggested that Amazon could be delivering to the moon by 2023, as a result of Bezos’ space engineering company, Blue Origin.

Not only that, but a new Amazon tool was revealed late this year that helps anyone with an iPhone to locate odd parts that would require a trip to their hardware store. Called the Path Finder, it finds the appropriate product a person is searching for on Amazon.

Not one to remain on the outskirts on new technology, more recently, it was reported that Amazon had officially joined the blockchain party after revealing it had launched two services: Amazon Managed Blockchain (AMB) and Quantum Ledger Database (QLDB).

According to John Blackledge, a financial analyst at Cowen, he’s bullish on all major parts of Amazon for next year, reports Business Insider.

Blackledge is of the opinion that Amazon’s share price is undervalued, putting a price target of $2,250 against it, with the company’s overall revenue growing at a compound annual growth rate (CAGR) of 17 percent over the next five years.

Blackledge went on to say that there are “multiple levers” that will push its price higher. These include its cloud-computing business — such as its Amazon Web Services — advertising, and its business-to-business marketplace.

Others, however, are more bullish on its share price for next year. Peter Cohan, a tech stock analyst, author, and businessman, published an article in Forbes in August giving his reasons why Amazon will reach $4,000 a share in 2019.

Now that you have actionable information on the future of Amazon, it’s time to start investing. With eToro, a leading social trading platform, you can trade manually or copy the actions taken by leading traders, taking much of the stress and work out of your investments.

This post is brought to you by eToro. eToro is a multi-asset platform which offers both investing in stocks and cryptocurrencies, as well as trading CFD assets.  Please note that CFDs are complex instruments and come with a high risk of losing money rapidly due to leverage. 65% of retail investor accounts lose money when trading CFDs with this provider. You should consider whether you understand how CFDs work and whether you can afford to take the high risk of losing your money.  Past performance is not an indication of future results. This is not investment advice. Your capital is at risk.