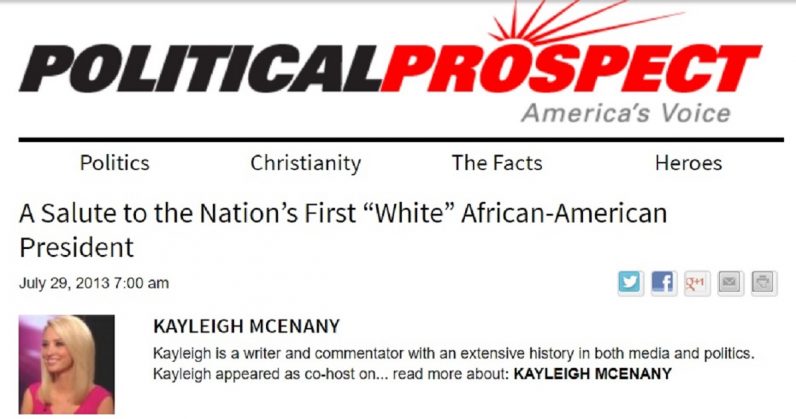 The website – whose name changed from RealReaganConservative.Com to PoliticalProspect.com – appears to have gone into “maintenance mode” back in 2016, which of course coincides with Trump’s election. It appears McEnany had a lot to say about African Americans, liberals, Muslims (with a specific emphasis on Palestinians), and Christian conspiracy theories.

In fact, several stories that were apparently published for public consumption during the lifespan of the blog have, seemingly, been deliberately scrubbed.

This adds up. McEnany’s likely been under political scrutiny since 2016 and, based on what I’ve seen so far, scrubbing the site was certainly a smart decision. Political Prospect was obviously fixated on causing outrage. I’d rate it smack-between The Daily Stormer and Breitbart: It doesn’t appear to go quite as far right as the former, but it lacks the savvy and integrity (comparatively!) of the latter. It’s not the sort of website you want everyone in the country suddenly browsing once you’ve become the US Press Secretary. But the Wayback Machine never forgets.

Let’s just dive in, shall we?

The first page I tried to open was from 2011 and entitled “Kayleigh on the campaign trail.” Somehow, its contents have been lost to time:

The next one I tried to open was “Conservative solutions to liberal delusions” from 2013, it lead to a different error page:

Finally though, I managed to find some pages that worked and it was smooth sailing from then on. If you consider reading a non-stop barrage of shoddy writing, piss-poor reporting, outright racism, and a permeating hatred for Islam as “smooth sailing.”

I don’t normally criticize fellow “journalists,” but since I’m punching way, way, way, up here I think it’s okay. We all make mistakes, but the first article on her site that I got to load was a diatribe (originally published on The Blaze) she wrote promoting a debunked Columbine Shooting conspiracy theory:

Just moments after she sat down, Rachel Joy Scott was shot in the leg. She tried to run, but she was then shot in the chest. As she tried to crawl away, the deranged gunman grabbed her by her hair and asked her that fateful question: “Do you still believe in God?”

And the shooter, who she had lovingly shared Christ’s word with just three weeks earlier, shot her in the head and ended her life.

The next article I clicked on demonstrated a level of blatant racism usually reserved for anonymous message boards. In July of 2013 McEnany penned an article entitled “A Salute to the Nation’s First “White” African-American President.” Here’s a horrific quote from her piece:

The piece concludes with the following statement:

While the rest of the mainstream media has embraced the term “White Hispanic” in an attempt to incite racial discontent, Political Prospect believes, like Martin Luther King, that people should “not be judged by the color of the skin but the content of their character.” It’s time to move past race, despite the fact that the mainstream media and this President insist on dwelling on it. Here at Political Prospect, we refuse to groupify, categorize, and divide this nation. Rather, we believe that we are all Americans — one, united, indivisible entity.

Here’s another from 2011 called “Are Islam and Democracy Compatible in the Aftermath of the Arab Spring?” It’s difficult to tell what exactly the future Press Secretary is trying to say in this piece. It goes from this:

Those of you who know me may be aware that The Economist is my absolute favorite publication hands down. I respect the magazine and believe that it gives you a fairly unbiased and comprehensive overview of political and economic news around the world. I encourage all to read it.

The bottom line is this. For democracy to thrive there must be civil liberties. Implementing Sharia law at the national level cannot be an option.

And what’s in between is a semi-coherent rant about how Muslim extremists will always try to gain more power. I urge you to read it for yourself in it’s entirety.

There’s also this article that claims a Palestinian market displaying a quote from the Quran about Jesus serving Allah (God) is indicative of all Muslim’s bigotry towards Christians. It attempts to back this claim up with a picture of a T-shirt showing the country of Israel draped in the Palestinian flag being sold in the same market.

Hidden among these posts is a steady diet of hilarious political commentary that hasn’t aged very well. In this article she decries that Republicans are no longer the party of “family values” after GOP Congressman Mark Sanford won reelection in 2013. Here’s a fun snippet:

While the rest of the nation celebrated Father’s Day, Sanford’s four sons had no father to celebrate with. Why? Because Sanford found it more important to visit his Argentinian mistress – all on the taxpayers’ dime.

And, of course, I’ve come across at least five articles demonizing President Barrack Obama and the Democrats for running up the deficit – something that’s reached a record high under her new boss President Donald Trump. Here’s a quote from one she wrote in 2013:

It’s a well-known fact that President Obama has zero regard for the US National Debt. The reckless increase in our nation’s debt under this president is obvious, naive, and dangerous.

She then goes on to state “the facts” about Obama’s spending, which are bullet points that have obviously been taken out of context and used for political effect.

This is just the tip of the iceberg. I’ve barely scratched the surface here and, frankly, it’s only a matter of time before a much larger editorial team pores over the whole archive and drops a bombshell report.

The question is, given the company Press Secretary McEnany keeps now, will any of this even matter?

Read next: Psychedelic mushrooms could affect the brain long after their active ingredient leaves the system