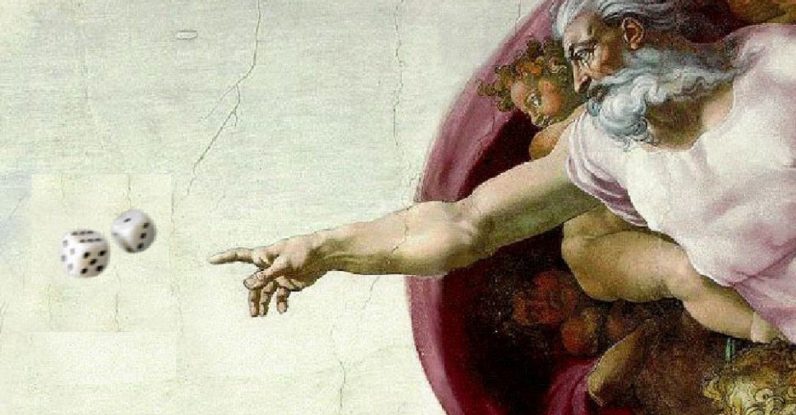 Quantum Darwinism (QD) is a spooky explanation for objective reality that ties together the work of Charles Darwin, Albert Einstein, and Stephen Hawking. It tries to resolve the glaring differences between the quantum and classical worlds by theorizing that reality, as we experience it, is just the imprint left behind from God‘s dice as they bounce around the universe.

The reason science enthusiasts are all atwitter with discourse on QD this summer is that, despite the fact the theory’s been around for over a decade, it’s only recently passed enough experimental tests to lend it credence beyond the realm of philosophy. Three different research teams have conducted independent simulations over the past year to kick the tires on QD, and so far everything looks good.

So what, exactly is QD? It was proposed by theoretical physicist Wojciech Zurek in a 2009 research paper. According to him:

Quantum Darwinism describes the proliferation, in the environment, of multiple records of selected states of a quantum system. It explains how the fragility of a state of a single quantum system can lead to the classical robustness of states of their correlated multitude; shows how effective ‘wavepacket collapse’ arises as a result of proliferation throughout the environment of imprints of the states of quantum system; and provides a framework for the derivation of Born’s rule, which relates probability of detecting states to their amplitude.

Basically, Quantum Darwinism is the theory that particles leave imprints on their environment and what we experience as reality is the observation of copies of these imprints. But that’s pretty wacky, so we’ll need to dive a bit deeper to figure out what’s going on.

The world you and I see around us is called the classical world. You’re either here or there in this realm, but never both. If you’re on a train traveling at 100 km/h and you travel in a straight line for one hour you will have traveled 100 km. It works the same way every time because the classical world is bound by certain, seemingly immutable laws.

However, it’s now considered fact that the quantum world – the subatomic realm – doesn’t operate with the same governing rules. In quantum mechanics it’s a given that a particle can exist in more than one simultaneous state. It can be up, down, and both all at once – this is called superposition.

But this is all old news. About a hundred years ago a generation of now-legendary physicists including Niels Bohr and Max Planck cobbled together a quantum mechanics theory that still informs the majority of rigor on the subject. Modern scientists have picked up the thread and begun tracing it in the time since, but reverse-engineering the universe is no small feat.

In 2019 we still can’t resolve the two different worlds. The classical one appears to be a what-you-see-is-what-you-get experience. You can look at the same rock a billion times and it won’t suddenly become something else. You can’t “use up all your observations” of a rock. Yet the quantum world tells us that particles exist in multiple states and when we interfere with them by merely observing or trying to measure them, it causes them to collapse into the state we see.

The big question, as Zurek puts it, is:

How is it then possible that objects we deal with [in the classical world] can be safely observed, even though their basic building blocks are quantum?

Imagine trying to build something with rectangular bricks that were both vertical and horizontal at the same time. Furthermore, the nature of the bricks’ superposition is such that it precludes you from knowing which state they’ll end up in until they’re sealed with mortar. Anything you built would almost certainly become immediately decoherent the moment it snapped from a quantum system to a classically observable reality. In this light, classical reality can’t exist. Yet, to paraphrase Descartes: we think, therefore both us and classical reality must exist. But explaining the transition from superposition to what we actually observe has so far been impossible for physicists.

Bohr dealt with this problem, and other obstacles preventing the reconciliation of the quantum and classical worlds in the easiest way possible: he shrugged them off. Zurek describes it far more elegantly in his paper:

To bypass these obstacles Bohr followed Alexander the Great’s example: Rather than try disentangling the Gordian Knot at the beginning of his conquest, he cut it. The cut separates the quantum from the classical. Bohr’s Universe consists of two realms, each governed by its own laws.

With two entirely separate worlds, physicists were free to treat each one as independent realms of study. Enter Einstein.

Einstein didn’t like this separation very much. He wrote a letter to Max Born, one of the physicists responsible for quantum theory, where he famously said “Quantum theory yields much, but it hardly brings us close to the Old One’s secrets. I, in any case, am convinced He does not play dice with the universe.”

Here most experts agree that Einstein‘s talking about the true nature of the universe, not a bearded deity sitting upon a Holy throne in the cosmos. It’s established that the great physicist didn’t believe in a “personal God,” so it’s likely he was demonstrating his disbelief that objective reality spawns from utter uncertainty.

Uncertainty, here, isn’t about whether scientists are sure of themselves or not. The Uncertainty Principle, proposed by Heisenberg, says that we can never be completely sure of both the location and speed of a particle. This means we can’t predict what’s going to happen next because quantum mechanics tells us these linked variables cannot be determined until a particle‘s been observed, and thus its potential state collapses into observable reality.

Einstein figured there was better explanation somewhere beneath quantum mechanics that would tie everything together in one reality that shared the same laws and rules. Stephen Hawking went looking for this general certainty – for lack of a better term – in the universe and he decided Einstein was wrong about some things.

Stephen Hawking took on Einstein‘s statement in a 1999 lecture called “Does God Play Dice?” He said:

The British physicist, John Bell, who died recently, devised an experimental test that would distinguish hidden variable theories. When the experiment was carried out carefully, the results were inconsistent with hidden variables. Thus it seems that even God is bound by the Uncertainty Principle, and can not know both the position, and the speed, of a particle. So God does play dice with the universe. All the evidence points to him being an inveterate gambler, who throws the dice on every possible occasion.

But he didn’t entirely disagree with Einstein. His supposition was that black holes represented the true random nature of the universe. Since even information can’t escape a black hole, their existence proves that the universe isn’t predictable at all and, as Hawking put it, “God still has some tricks up his sleeve.” This seems to indicate that he, like Einstein, also thought there was a deeper explanation beyond quantum mechanics theory — at least by itself — for the origin, structure, and conduct of the universe.

This brings us to Zurek, his work, and what it means. He describes the mechanical transition from the almost-inexplicable state of superposition to what we’re able to observe and measure as a function of particles interacting with their environment. In his view, we’re all voyeurs watching particles interact with other particles. This answers the question “how does the universe not fall apart the second we observe it?” Because theoretically, while our observations can cause decoherence, it’s the environment that generates the majority of superposition outcomes.

Furthermore, the superposition outcomes that manifest as reality are those which are the most suited for acceptance by their environment – just like the beaks of Darwin’s finches. Quantum Darwinism tells us that the ‘fittest’ position for a particle to land in will manifest as reality because it’s the one that will imprint the most times on its environment, and thus the most prolific.

Basically, we’re seeing the imprint left behind from the pips on God‘s dice as they bang around (as particles) in the sandbox that is our universe. When God tosses them, the universe accepts all possible outcomes but classical observation means our reality manifests as the ‘fittest’ one – a result of Darwinian evolution.

Eventually physicists hope to prove Quantum Darwinism outside of experimental simulations. Right now we can’t be sure it’s the one ring that will rule all quantum mechanics theories, but there’s good reason for the buzz surrounding the fact it’s held up to the first round of scientific examination. Getting a proper grasp on what defines true, God-level objective reality is the ultimate goal of science and, so far, quantum mechanics is the path that makes the most sense.

Read next: Twitch bans, then unbans streamer after accusing him of fraud