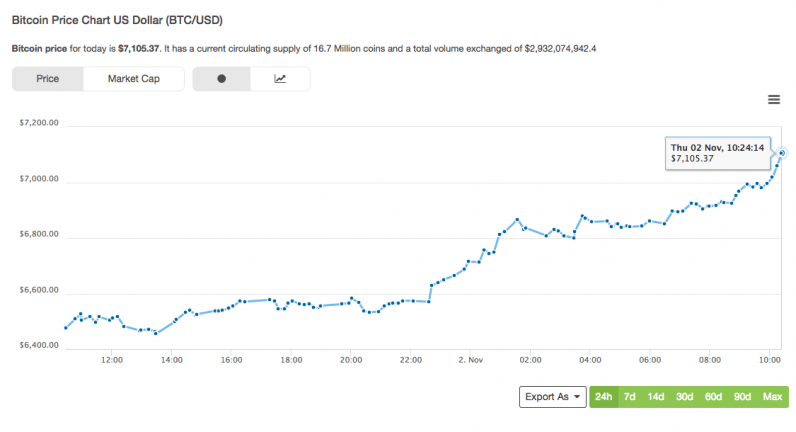 Early cryptocurrency adopters must be overwhelmed with joy right now. The price of Bitcoin has skyrocketed past the $7,000 mark for the first time ever, hitting yet another important milestone and setting a new all-time record high.

The biggest cryptocurrency by market share officially passed $7,000 minutes after 10:00 AM UTC and boasts a value of $7,340 at the time of writing, according to exchange stats obtained from e-currency ranking chart CoinGecko.

CoinMarketCap indicates this development marks a 22.95-percent increase in the value of Bitcoin in the last seven days alone. For more context, the currency’s market cap stands at a whopping $119 billion as of now.

Despite running into a number of roadblocks this year, including tightened cryptocurrency regulations in China and South Korea, the value of Bitcoin has continued to climb the charts throughout the year.

Earlier in March, Bitcoin made headlines again when the currency jumped over $1,200 to become more expensive than an ounce of gold for the first time ever – not that this somewhat arbitrary comparison bears any deeper implications.

Read next: This Twitter tool tells you if you’re arguing with a propaganda bot