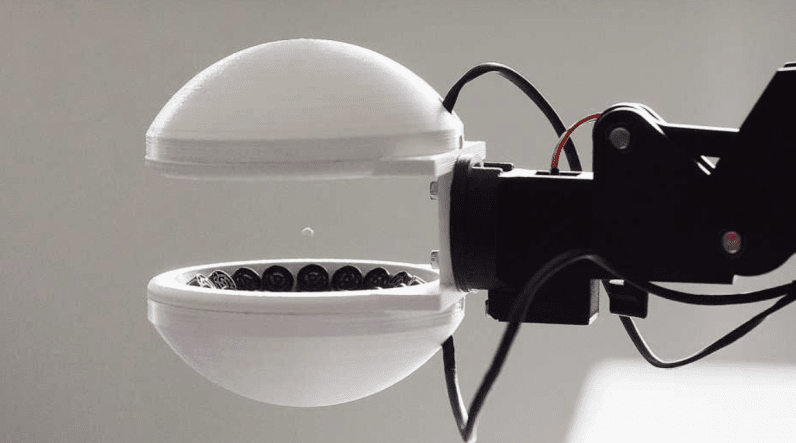 When we think about robots working in factories and assembly lines, we often imagine large robotic arms moving heavy components around. But there’s also automation for small fragile materials as well, requiring the lightest touch to move. No problem: Robots may soon be able to move small objects without touching them at all.

Marcel Schuck, a researcher at the Swiss Federal Institute of Technology in Zurich (ETH Zurich), is developing a method for robots to carry small objects without touching them at all. Ultrasound waves can generate a pressure wave that humans can’t see or hear. Balance the amount of pressure around a small object, and it will seem to float in midair, in a phenomenon known as acoustic levitation. It looks a bit like robotic telekinesis.

Of course, in actuality, it’s being held in place by the forces generated by the sound field – an acoustic trap of sorts. Schuck’s prototype holds small objects in a force field created by a myriad of tiny speakers fitting on the interior of two semispheres. What’s more, Schuck’s software allows the sphere to be moved around within the semispheres, allowing for precise positioning – even if the robot arm itself is not so precise.

Though Ultrasound levitation has existed for some 80 years, Schuck’s goal is to make the technology more practical. Right now, he’s looking into practical applications for the acoustic gripper. Existing robots handling sensitive materials often use soft rubber-like grippers, but these can easily be contaminated and have less-than-perfect accuracy.

Potential industries that might benefit from the ultrasonic gripper include watchmakers, where existing grippers can damage the thin film of lubricant on small components. Microchips seem like another potential use. The ultrasonic gripper is an ongoing project as Schuck gets feedback from the industry, but if he can get it out in the real world, he hopes to begin a startup based on ultrasonic robotics.

The robot that grips without touching on ETH Zurich

Read next: Your beginner's guide to Honey, the anti-Amazon shopping extension