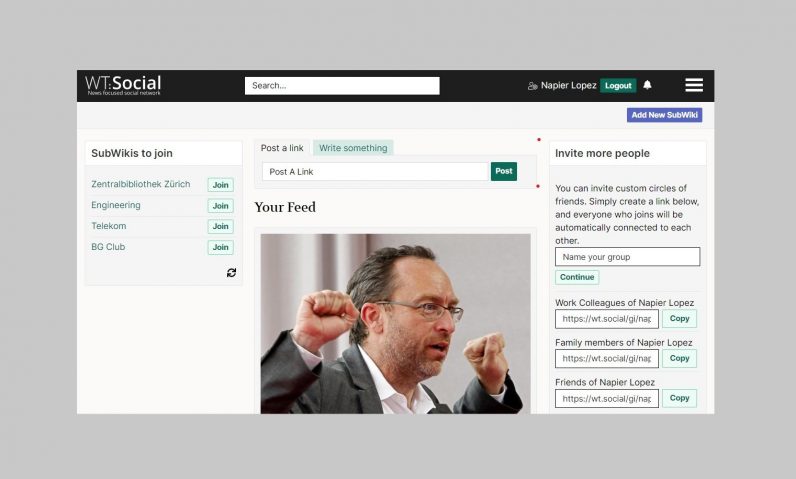 Wikipedia co-founder Jimmy Wales thinks he can create a better social network. Called WT:Social, the network has no financial association with Wikipedia, but operates on a similar business model: donations, not advertising.

WT:Social went live last month and is currently nearing 50,000 users. The company is rolling out access slowly; when I signed up, I was approximately number 28,000 on the waitlist. Alternatively, you can pay 13 bucks a month or 100 a year to get access right away.

In comments to the Financial Times, Wales said “The business model of social media companies, of pure advertising, is problematic. It turns out the huge winner is low-quality content.” You don’t say.

WT:Social’s interface is rather sparse at the moment, featuring a simple feed comprised of news stories and comments below them. News is a big part of the network; it’s a spinoff of Wales’ previous project, WikiTribune, which sought to be a global news site comprised of professional journalists and citizen contributors. Both WikiTribune and WT:Social emphasize combatting fake news, highlighting evidence-based coverage over the focus on ‘engagement’ seen on other networks. Each story posted to the network makes prominent where the article comes from, as well as sources and references.

You can also join various “SubWikis” that are essentially like Facebook groups or subreddits, which filter content to stories of a given topic. You can also add hashtags to a post or follow hashtags for more specific interests that might span more than one SubWiki. Posts are currently sorted chronologically, but the site plans to add an upvote system for users to promote quality stories.

Taking on Facebook and Twitter is no easy task: Just ask Google. But Wales appears to have a more focused approach for WT:Social, aiming for meaningful content and hoping to build smaller, niche communities. To this end, Wales doesn’t seem too concerned about running on donations; the Financial Times says Wales highlighted the success of Netflix and the New York times as examples that people are willing to pay for meaningful content. I suppose we’ll find out if that’s true in due time.