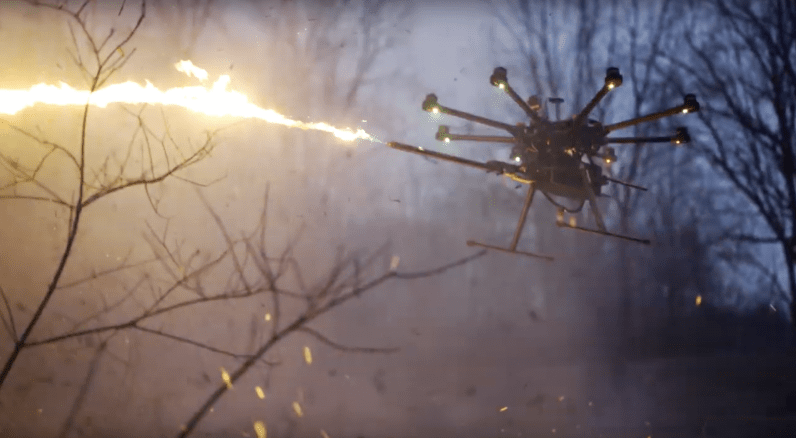 Growing up in the 90s, the idea of a radio controlled aircraft that spits flames was merely a source of doodles on times table worksheets in school, the sort of thing you wish existed, but were fairly certain you’d never see. As an adult, it seems I’ve manifested this contraption into existence. You can send thanks to my Twitter account, if you’d like.

My childhood creation has been around a while. Drones came first, of course, but like all things men touch, it was really only a matter of time before we experimented with adding dangerous things to the business end of one.

In this case it was a flamethrower, but it’s fair to say we’ve dabbled a bit. There’s a drone with a chainsaw attached, for example. I witnessed it fly during the “Drone Rodeo” one year at CES — but only after our former social media maven, Esther, and I got lost in the desert trying to find it. Or there’s this one, a drone that shoots projectiles in the form of your favorite Independence Day firework, the Roman Candle.

Needless to say, it was really only a matter of time before humans added a flamethrower. Because, why the hell not?

And though it’s not a new idea, what is new is the opportunity to own one, without going the DIY route. The contraption is known as the Throwflame (creative, right?), and it features a TF-19 WASP drone flamethrower attachment the company says can shoot fire up to 25 feet.

With just a gallon of fuel, you can turn that pesky wasp nest into a scene from “The Purge,” for about a minute-and-a-half anyway. But just because you could, definitely doesn’t mean that you should. I have a feeling this isn’t the sort of thing that is going to fly with your HOA.

It’s also worth mentioning that the attachment is $1,499, according to Gizmodo, and you’ll still need to buy a higher-end drone — Throwflame recommends the DJI S1000 — to attach it to.

If you’re chomping at the bit, you can grab one today at the company’s website.

Read next: YouTube's newest feature could save you a bundle in mobile data charges