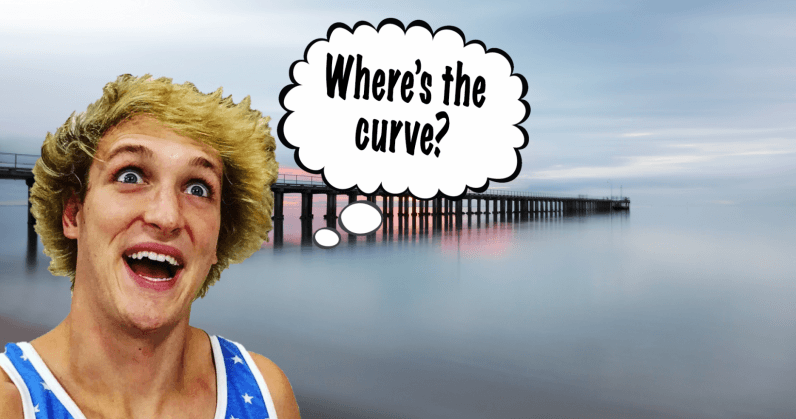 A group of Flat Earthers are prepared to set sail on a bizarre journey to the Antarctic to prove, once and for all, that we’re living a lie.

The group, spear-headed by the intellectuals over at the Flat Earth International Conference — the same group that believes NASA is run by conspirators hell-bent on perpetuating the myth of a spherical Earth — plan to set sail early next year. Logan Paul, the internet’s favorite punching bag, is reportedly interested in attending.

Paul, you may remember, launched a teaser for his upcoming documentary, “The Flat Earth: To The Edge and Back.” The trailer follows the controversial vlogger on a trip to a flat earth conference where he seems to begin questioning his previous beliefs and embracing the theory itself. In it, you can expect him to ask the hard questions, like: are planets a thing, or does this sport coat/beard combo make people forget I once filmed and laughed at a man who had committed suicide?

So far, little is known about the trip itself. What we do know is that Flat Earthers are plotting a course to Antarctica where they hope to see the ice wall they believe encircles the planet. It’s said to be 164 feet tall, and thousands of feet thick — I couldn’t make this shit up if I tried.

“If you take a globe and you squish it down, the Antarctic would go all the way around the Earth. It’s kind of like an ice shore and it’s very, very large. It’s not like you just go there and you can just peek over it,” Robbie Davidson, FEIC’s founder, told Forbes. “We don’t believe anything can fall off the edge, because a big portion of the flat earth community believes that we’re in a dome, like a snow globe.”

Granted, that’s about the end of the line for Flat Earthers agreeing on anything. It’s a community rife with infighting, and one in which the only consensus is that we’re living a lie on a planet that’s actually a dome, not a sphere. Still, one has to wonder why a group of conspiracy theorists like the Flat Earth Society hasn’t just ponied up the cash to prove its theory — planes and boats exist, after all. At the surface, it appears the group is content with spending money on conferences to talk about the theory rather than actually proving it.

Of course, it’s unlikely that a little thing like proof would convince anyone other than the group’s most fickle members. But hey, there’s always Logan Paul.

Read next: Google's AI-powered Doodle to celebrate Bach's birthday is its best ever