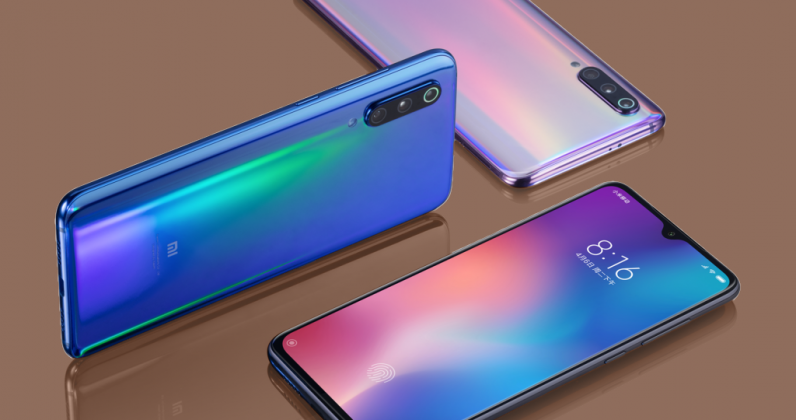 We finally have 2019’s first flagship launch: the Mi 9. This is Xiaomi’s ambitious device, that has Qualcomm‘s new Snapdragon 855 processor, and a triple-camera system led by a 48-megapixel sensor. Plus, its highest variant features a massive RAM of 12GB. On paper, the device has all the markings of becoming a great competitor of last year’s feature-loaded Huawei Mate 20 Pro.

Before we get into the details of the product, here’s its impressive spec sheet:

Xiaomi‘s opted for an-all glass case with a ‘holographic design’ on the back to give it of a rainbow effect. We’ve seen these kinds of designs on some of Huawei’s phones (like the P20 and I have to admit it looks cool.. On the front, the company’s adopted a ‘Dot Drop’ notch, and an under-the-display fingerprint sensor.

Certainly, the most noticeable aspect of the spec sheet is the triple-camera setup. Now, don’t get your hopes too high by seeing the 48-megapixel sensor. It’s the same Sony IMX586 sensor that we’ve seen in phones like the Honor View20. The catch is the photos you’ll take at 48-megapixels will have 0.8-micron sized pixels, and they’ll be quite noisy. You’ll get the best results from the sensor using 12-megapixels with a 1.6-micron pixel size. That means that you’ll be mostly using the 48-megapixel sensor to click photos at 12-megapixel.

Huawei successfully demonstrated the use of triple cameras with the P20 Pro and the Mate 20 Pro. So, it’s on Xiaomi to prove that their flagship’s a worthy competitor to its rival’s flagship. While you shouldn’t take DxOMark values to the heart, the Mate 20 Pro is still on the top of the leaderboard with 109 points to the Mi 9’s 107 points.

This also one of the first outings of Qualcomm Snapdragon 855, the chipmaker’s first 7nm processor, so you can expect the device to match or outdo Huawei’s Kirin 980 chip on the Mate 20 Pro.

While the Mi 9 has a smaller battery of 3,300 mAh – compared with the Mate 20 Pro’s 4,000mAH – the support for 27W wired fast charging and 20W wireless fast charging might make this up to consumers.

Read next: SCOUT is the portable charger that’s thought of everything -- and now, it’s half off