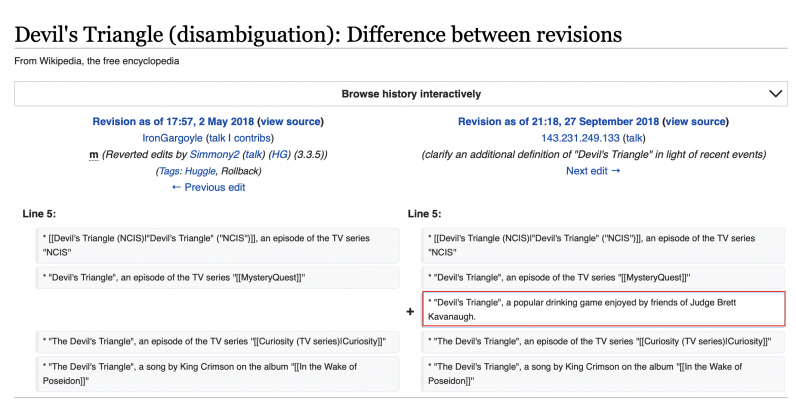 Supreme Court nominee Brett Kavanaugh today met with the Senate Judiciary Committee to discuss allegations of sexual assault and attempted rape. His accuser, Christine Blasey Ford, testified before members of the committee to tell her story, one that included allegations that Kavanaugh, then a high school student, drunkenly fondled her before attempting to remove her clothes.

As Kavanaugh faced a line of questioning that sought to shine light on phrases like “boofed” and “devils threeway” — two terms with a sexual connotation found in a 1982 yearbook — a congressional staffer was hard at work cleaning up some of his less impressive answers. In defining the latter, Kavanaugh stated it was a drinking game, similar to quarters, in which three shot glasses were placed on a surface and, presumably, one would toss, or bounce, quarters into them — that part wasn’t really described.

A quick search for the term, however, would lead one to far different conclusions. “Devil’s Triangle,” for example, features no prominent mentions as a drinking game before Kavanaugh’s confirmation process. It’s odd, considering that, at least according to Kavanaugh, the game has been around more than 30 years. What you will find, however, is a crude definition for group sex featuring a female and two male participants. In fact, it’s the colloquial term that features prominently in the bulk of Google’s results.

This wasn’t lost on a congressional staffer, who quickly edited a Wikipedia entry to include mention of a drinking game, as played by Kavanaugh.

The edit was spotted by a simple bot that tracks IP address ranges known to belong to members of congress, and their staffers, and tweets out the results of these edits. In this case, it was an anonymous staffer who worked in the US House of Representatives who made the addition.

It’s unclear who made the changes but we are fairly confident that if it wasn’t a drinking game before, it certainly will be now.

Perhaps unsurprisingly, it wasn’t just Congress that took interest in Kavanaugh’s drinking game explanation. Search activity spiked shortly after the exchange, according to Google Trends. Interestingly, the bulk of the internet seemed to have come from Washington DC, the location of today’s hearings.

Read next: Alleged Surface Studio 2 benchmarks leak, and I sure hope they're not real