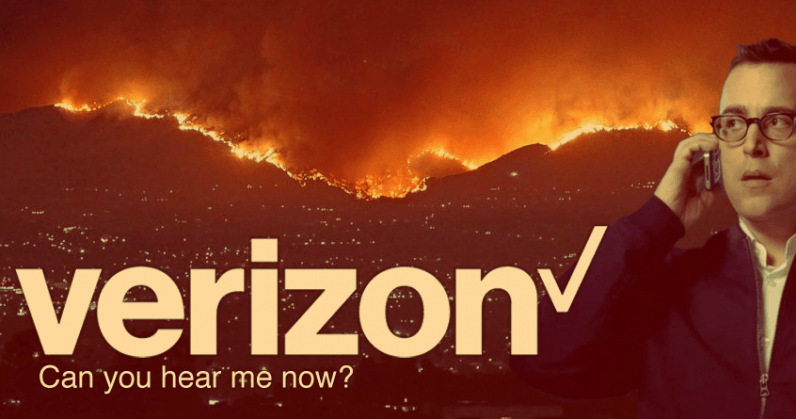 As wildfires raged out of control in Northern California this summer, the firefighters responsible for managing them learned a hard lesson about net neutrality.

For the Santa Clara Country Fire Department, it couldn’t have come at a worse time. When they needed them most, Verizon had effectively disabled their mobile devices, leaving the department to scramble for solutions while fighting fires that cost could cost California insurers some $10 to $12 billion.

This, from an addendum to a brief filed by 22 state attorneys general, the District of Columbia, Santa Clara County, Santa Clara Country Central Fire Protection District, and the California Public Utilities commission, all of which are actively seeking to overturn the recent repeal of net neutrality rules.

Bowden states that during his team’s response to the Mendocino Complex Fire, Verizon had effectively disabled communication in its command hub, a vehicle known in the complaint as OES 5262.

In the midst of our response to the Mendocino Complex Fire, County Fire discovered the data connection for OES 5262 [A fire department vehicle “deployed to large incidents as a command and control resource”] was being throttled by Verizon, and data rates had been reduced to 1/200, or less, than the previous speeds. These reduced speeds severely interfered with the OES 5262’s ability to function effectively. My Information Technology staff communicated directly with Verizon via email about the throttling, requesting it be immediately lifted for public safety purposes.

Verizon, now aware of the issue, didn’t immediately restore the department’s previous speeds. Instead, the company attempted to sell them a larger data package at more than twice the cost. “They would only remove the throttling after we contacted the Department that handles billing and switched to the new plan,” Bowden wrote.

It’s not the first time, either. Emails show that Verizon impeded the department in two previous fires, in December and June. The department now argues that Verizon is likely to continue its practice of milking public safety agencies out of sorely needed funds in a push to move them into more expensive plans.

Regardless of the plan emergency responders choose, we have a practice to remove data speed restrictions when contacted in emergency situations. We have done that many times, including for emergency personnel responding to these tragic fires. In this situation, we should have lifted the speed restriction when our customer reached out to us. This was a customer support mistake. We are reviewing the situation and will fix any issues going forward.

The company also noted that the issue has nothing to do with net neutrality. This is incorrect.

As Ars notes, all ISPs are entitled to impose data restrictions for anyone exceeding a a certain amount of data. The companies argued that it was allowed under current (and past) rules’ for “reasonable network management.” This argument, however, would typically only apply during periods of network congestion.

According to Bowden, the Santa Clara Fire Department was throttled at all times once it surpassed its 25GB monthly data allotment. In a side-by-side comparison, a crew member’s personal phone was measured against the department’s device, with one seeing speeds of 20Mbps/7Mbps, and the other clocking in at a paltry 0.2Mbps/0.6Mbps.

He also limited a consumer’s right to sue internet providers over this type of behavior.

Read next: Google is working on yet another podcast app