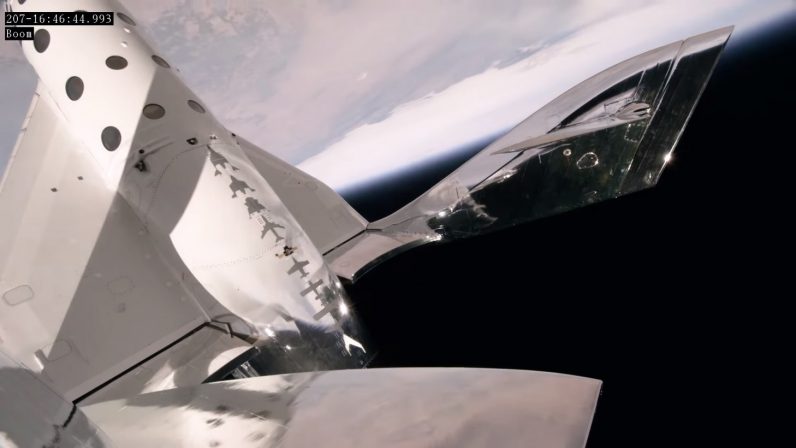 “Oh that is a million dollar view out the window Dave” says co-pilot Mike “Sooch” Masucci. That must not be counting the cost of the craft, which is nearly half a billion.

This latest test flight is the Unity’s 14th, ahead of what Virgin Group founder Richard Branson hopes will be its official launch as the world’s first passenger spaceship later this year.

Despite the boss insisting on what would appear to be a truncated timeline for delivery, Virgin Galactic CEO George Whitesides told Space News that the schedule for future flights would be dictated by the data, “we’ll let the engineers say when they’re ready to fly,” he said.

This time around the flight was notable for flying higher and faster than ever. A little after midnight yesterday morning the Unity’s companion craft, White Knight, brought it up towards the inner atmosphere where it then separated and initiated a 42-second rocket burn. At the apogee of its journey it reached a height of 170,000 feet traveling at mach 2.4, or 2.4 times the speed of sound.

Depending on what the ground team finds after reviewing the flight data, this latest test could bring the Unity a step closer to fulfilling its destiny as a public spaceliner. But, things haven’t always looked so heavenly for the Virgin Group’s space company.

One of the Unity’s predecessors, the VSS Enterprise, was lost in 2014 during a test-flight accident in which pilot Peter Siebold was seriously injured and co-pilot Michael Alsbury was killed. The US National Transportation Safety Board concluded the accident was the result of human error.

Today, four years later, and fourteen since the company was founded in 2008 with the sole mission of getting rich tourists into space for a few minutes of zero-gravity, Virgin Galactic is no longer the only company trying to get there first.

Amazon CEO Jeff Bezos’ Blue Origin and Elon Musk’s Space X are also in the game. While both CEOs have previously said they’d put civilians in space by the end of 2018, there’s been little to indicate either will meet that deadline. And in Bezos’ case, he’s now pushing for 2019.

Unfortunately, if you’re not already booked you’re too late. All the seats on the Unity are currently taken until at least 2021. And there’s still no word on when Space X tickets will go on sale. But, take heart: these are the early days of the second space boom. There’s reason to be optimistic that even those of us who aren’t rich may one day become space tourists.

Still, it’d be sweet to become a part of history by being on board that first commercial space flight.

What do you think readers? Will any of these billionaires actually put members of the general public in space before New Years Day 2019?