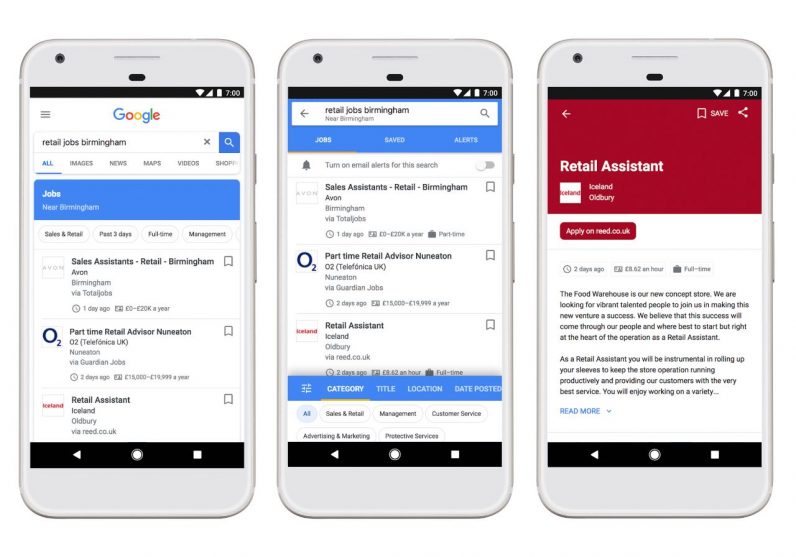 Google isn’t just about websites. The world’s largest search engine now shows everything from cinema times to flight statuses, and in the UK, is about to get even more useful with the introduction of job openings.

Here’s how it works: next time you’re looking for a new job, you can just ask Google. Typing simple queries like “teaching jobs” or “jobs near me” will let you browse listings pulled from a variety of sources, including Gumtree, TotalJobs, Reed, and The Guardian Jobs.

Google’s new tool shows you salary information, as well as the rating of the employer. If you’re logged in to your Google account, it’ll also use Google Maps to show you how long your commute will take.  Users can then click through to the job provider’s website to find out more and apply.

If you don’t want to apply straight away, you can save the listing for later. As you’d expect, this isn’t tied to a single device, allowing you to pick up on another device later on. You can also set up email alerts.

With this new tool, Google’s starting small. It doesn’t have comprehensive coverage of the UK recruitment market. That said, the company has launched documentation that’ll show sites how to structure their listings, so they appear in this feature.

Essentially, Google has built a dead-simple jobs aggregator, which is integrated into the search tool we all use on a daily basis. That’s pretty exciting.

The company says this effort builds on its commitment to help 100,000 UK workers find a new job or build their career by 2020. A huge part of this is Google’s Digital Garage program, which offers training in digital skills and products, and has so far helped tens of thousands of people.

Helping more people in the U.K. find their next job on Google Blog