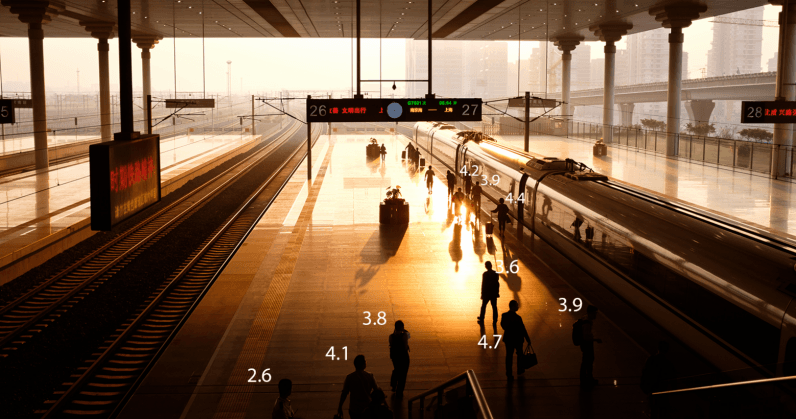 Proof that life imitates art — or at least Black Mirror on Netflix — China will soon be imposing strict penalties for those with low “scores” on its so-called “social credit” system. Starting May 1, Chinese citizens with low scores will be unable to travel via plane or train for up to a year, according to a release by the country’s National Development and Reform Commission.

China’s social credit system is a controversial one. President Xi Jinping’s plan is to score citizens based both on financial and social behavior, creating a number similar to a credit score in the United States.

“Once untrustworthy, always restricted,” is the guiding principle, according to a document signed by government officials, including the Supreme People’s Court.

Criminal acts and financial misdeeds affect the score, as do seemingly arbitrary actions like who citizens speak with, what they do, and items they purchase. Those found to have committed acts like spreading false information, causing trouble on public transportation, using expired travel tickets, failing to pay social insurance, or smoking on trains will be the first group punished under the new system, according to Reuters.

Although announced today, the system may have actually been in place since at least 2016, according to Human Rights Watch.

The organization tells the story of a Chinese lawyer, Li Xiaolin, who attempted to buy a planet ticket to make a 1,200 mile trip home after a business trip. After scanning his national identity card, the online system rejected the purchase, stating he’d been blacklisted by China’s top court. Xiaolin checked the status, assuming it to be a mistake, and found he was indeed flagged as “untrustworthy” for failing to carry out a court order a year prior.

He was prohibited from buying the ticket home.

Xiaolin’s crime was in defending a man accused of rape, and defaming the client, accidentally, during the trial. After turning over court documents to his client’s family, the family elected to post them online. Xioalin was sued for defamation and ordered to issue an apology to his client, which he did. He later learned, during the ticket-buying fiasco, that his apology was deemed “insincere” by the court, in part because of the date: April 1 (April Fool’s day).

He’s not alone. Journalists, political activists, and other private citizens have reported similar bans. Some seemingly stem from the most minor of infractions, or actions that would be legal elsewhere.

Journalist Li Hu, for example, found himself on the blacklist after accusing a government official of corruption.

The final version of the scoring system is set to be unveiled in 2020, and will relay real-time data reports on citizens to government officials, law enforcement, and possibly even other private citizens.

Tapping this kind of data doesn’t even require a computer or mobile phone anymore, at least not in China.

Chinese law enforcement personnel are already conducting large-scale tests of advanced optics with real-time facial recognition. The glasses are capable of not only identifying Chinese citizens, but pulling from national databases, allowing the wearer to instantly recognize wanted criminals or political dissidents.

It’s not a stretch to assume the same glasses could include the social credit score of citizens.

Add the newest developments to China’s already Orwellian approach to surveillance — over 170 million surveillance cameras (with 400 million more on the way), one of the world’s largest collections of citizen’s biometric data, and stringent censorship laws in place that block popular websites like Google and Facebook — and the present looks bleak.

But the future looks downright dystopian.

Read next: Let the robots have the damn jobs — all of them!