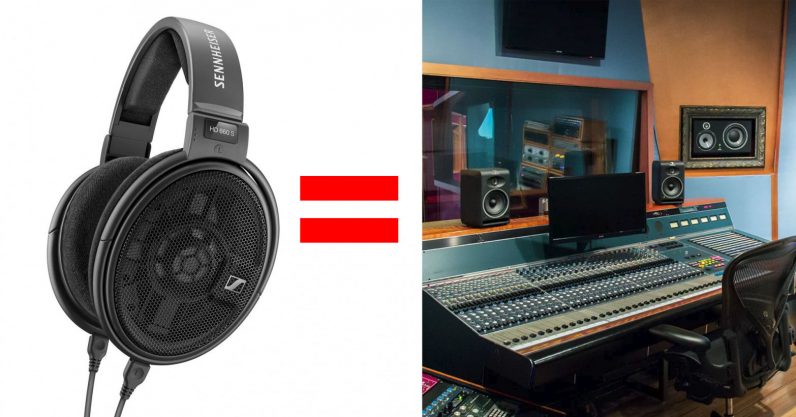 Spend some time shopping for headphones, and you’ll quickly grow tired of devices claiming to present music “as the artist intended,” despite sporting vastly different sound. But what if your favorite cans actually could sound like the recording studio where your favorite music was mixed?

Enter SonarWorks, a company I’m guessing you’re not familiar with, as it’s best known in audio engineering circles for tuning professional studio speakers. Now SonarWorks is turning its attention to something more mainstream by calibrating headphones to sound like those same studios.

The concept is simple. First you tell SonarWorks’ software, called True-Fi, which headphones you’re using; 138 models are supported, at the time of writing. It then modifies your PC’s audio output in order to “flatten” the frequency response into something very close to the neutral sound of a professional mixing studio. And I do mean very close.

SonarWorks put its money where its mouth is and invited me to Flux Studios in Manhattan, a recording space that has helped produce tracks for celebs like JLo, Chance the Rapper, and others. There I was, sitting in front of a speaker setup costing tens of thousands of dollars, for the sole purpose to be pitted against a couple of headphones running True-Fi.

First I listened to a track through the studio speakers – high end monitors from Focal Audio, for those wondering. Naturally, it sounded amazing. Neutral, transparent, with good bass extension, instrument separation and other positive audio jargon.

Then, I tried a pair of audiophile-approved Beyerdynamic headphones (DT770 or DT880, not sure). Finally, a pair of Marshall Major 2, which retail for around 50 bucks.

All the setups sounded the same. Not identical, but remarkably similar. $50 dollar headphones had the same overall sound presentation as a professional studio. That’s wild.

Of course, headphones can sound neutral at any price point – whether they sound is good is another matter entirely. Despite having similar presentation, the Marshalls were not as good as the Beyerdynamics. And Sonarworks isn’t tweaking the spatial presentation – your headphones won’t imitate the expansive soundstage you get from speakers.

Still, in each instance, turning off the True-Fi was a noticeable downgrade, particularly with the dramatic shift on the Marshall’s. This makes some intuitive sense though: it stands to reason your music will sound better if your headphones can closely emulate the source they were mastered on.

This remained true when I tested True-Fi at home, using the Sennheiser HD 660S. Those are wonderful headphones, but out of the box, their sub-bass is pretty anemic. With True-Fi off, listening to tracks like “Killmonger” from the Black Panther score, I noticed a stark change in volume when the 8-note motif comprising Killmonger’s theme jumped from sub-bass to midbass. With True-Fi on, there was no sudden shift, and the whole thing just sounding better.

At this point you might be wondering “why not just EQ the headphones?” There are a few problems. For one, headphones often respond poorly to EQing; you can come across clipping, muddiness, sibilance, distortion, and a host of other issues. I spent some time EQing the HD660 S to sound like as Sonarworks’ tweaks. Even when I emulated the overall sound signature, sound quality was noticeably worse.

SonarWorks claims its technique goes beyond what you can achieve with EQing. A typical EQ has less than 10 bands you can tweak. A fancy one might let you mess with dozens. Sonarworks won’t reveal all its secrets, but says it’s working with thousands of points, allowing it to make precise micro-adjustments to eliminate the typical artifacts found by EQing.

Even if SonarWorks overestimates its prowess and you could match it with a good EQ, that can also be frustratingly time consuming. You’d likely have to spend hours making the precise tweaks to get the soudn just right. You might have to set different EQs for different apps. If you plug in another pair of headphones, you might need to start all over again.

Part of True-Fi’s appeal is its simplicity. You simply pick your headphone model, gender and age (the latter two to compensate for hearing loss) and leave it on. The only parameters you can tweak in app are adding more bass and adjusting the hearing-loss compensation, which mainly affects treble.

True-FI is currently available for Mac and PC only, though mobile versions are on the way. At $79 it, isn’t for everyone, but I wish it were.

Imagine a world where True-Fi – or something like it – were integrated into popular services like Spotify and Netflix. Your specific headphones could be tuned to sound like the exact studio your favorite music or movie was mastered. I wouldn’t have to worry about whether the headphones I’m buying are too bassy for classical or too tame for hip-hop. You could truly, actually hear music hear sound “like the artist indended.”

For now though, True-Fi is just a really good way to get a more neutral sound out of your headphone. $79 will be a lot to swallow for some people, but the simplicity and efficacy of the software could make it a valauble tool for the audiophile or amateur producer. If you want to try it yourself, you can check if your headphones are compatible here and download a 10 day-trial here.

Read next: Bitmain's new $12K cryptocurrency miner might be useless by the time it ships