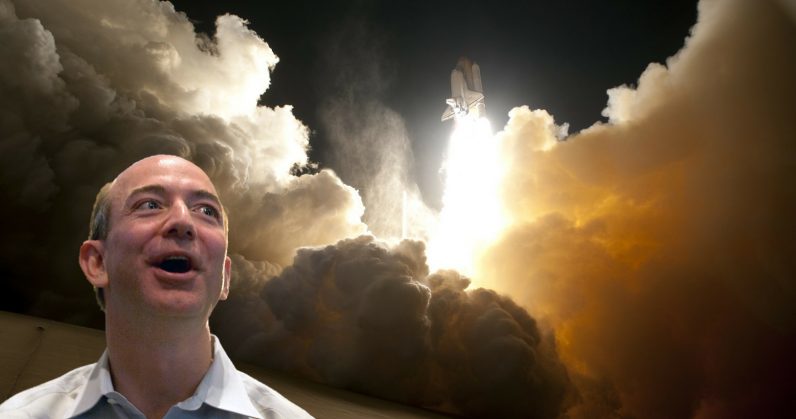 (Bloomberg) — Jeff Bezos wants to make space travel as dynamic and entrepreneurial as the internet.

“The price of admission to space is very high,” Bezos said Saturday night in New York, accepting the Buzz Aldrin Space Exploration Award at the Explorers Club Annual Dinner. “I’m in the process of converting my Amazon lottery winnings into a much lower price of admission so we can go explore the solar system.”

Bezos previously said he’s funding rocket company Blue Origin LLC to the tune of $1 billion a year through the sale of Amazon stock. His comments at the event suggest that may be only the start of his financial commitment to the project, which is developing reusable rockets. His net worth is $131 billion, with $125 billion of that in Amazon stock — and that “keeps on going up,” his mom, Jackie Bezos, said during the cocktail hour. His fortune has grown more than any other on the Bloomberg Billionaires Index this year.

The Amazon chief executive officer wasn’t the only billionaire at the glitzy event at the Marriott Marquis in Times Square. West Coast industrial real estate tycoon Ed Roski and Frederik Paulsen, a Swedish pharmaceutical titan and pole explorer, perused the tarantula, cockroach and roasted iguana appetizers amid 1,200 guests including James Lovell, the first person to journey twice to the moon, on Apollo 8 and Apollo 13.

Bezos later declined to clarify just how much of his fortune he’ll spend on space travel. But Paulsen, at the next table, said Bezos could spend it all, “if he leaves enough to take care of his mother.”

Bezos is definitely not leaving mom behind. She said she’s going into space. She’s already been on an ocean voyage to recover F-1 rocket engines, a trip where the crew made accommodations for her, as Bezos recounted from the stage.

“When we first boarded the ship, the Norwegian captain, a very nice guy, he went to me and said ‘Mr. Bezos, I’ve taken the liberty, because your mother’s on board — we’ve never had a woman on board before — of removing all the pornography from the common areas. I hope that’s OK with you.’ I said ‘Yeah, it’s fine, it’s good, thank you.’”

To be sure, plenty of great women explorers have made out pretty well in a male-dominated world. The evening honored Edith Widder, an expert on bioluminescence who joined billionaire hedge-fund founder Ray Dalio on a dive to the bottom of the ocean. They ate sushi in his posh submersibles with surround-sound stereos that played Jack Johnson, Widder recalled.

Widder said she’d rather see Bezos’s money go into ocean exploration than space. James Watson, who co-discovered the structure of DNA, advised Bezos to spend just a quarter of his fortune on space exploration, so he can take care of this planet’s needs. “We’ve got to fix the potholes,” Watson said. And the winners of the New Explorer Award, Gino Caspari and Trevor Wallace, said they’re looking for “one-and-a-half or two million” to complete the recovery and preservation of artifacts from a tomb in south Siberia.

Bezos loves Earth, too. “We have sent a lot of probes to every planet in this solar system. Believe me, this is the best one,” he said. “The world that we live on is an absolute gem.”

The idea of space as a backup if Earth is destroyed is “unmotivating,” he said.

“I want a world for my grandchildren’s grandchildren to live in,” he said. “I also want a dynamic world, a world that is expanding and growing. I do not believe in stasis. And this planet is finite.”

Read next: The 'splinternet' is coming: Why countries will break away from today’s internet