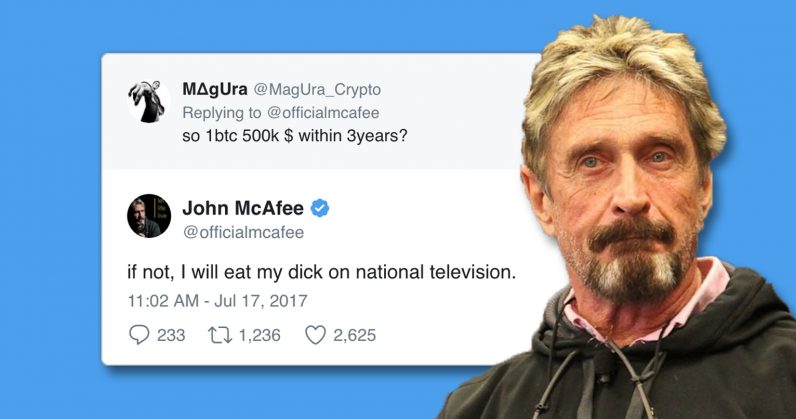 Noted cybersecurity-turned-cryptocurrency expert John McAfee made an interesting bet on Bitcoin last year. As the world’s largest cryptocurrency climbed to dizzying new heights, McAfee didn’t see an end in sight. He claimed, via Twitter, that if the price of a single bitcoin didn’t reach $500,000 within three years, he’d “eat [his] dick on national television.”

McAfee, ever the showman, one-upped himself just a few months later. In November, as bitcoin targeted $10,000 for the first time, he tweeted the following.

Everything was going well for McAfee in the period that followed. Bitcoin went parabolic and rocketed to its all-time high, just under $20,000. But since then, cryptocurrencies have hit a bit of a rough patch. Bitcoin is down over 30 percent in January, and more than 50 percent from all-time highs set just six weeks earlier.

While there’s still plenty of time for a full recovery, each major sell-off brings us closer to the conclusion that John McAfee, in the near future, will either have to eat his words, or his dick.

Luckily for McAfee, I scrapped together a wine list to see what pairs best with, uh, penis.

This wasn’t as easy as you might have imagined. First I consulted Google to get an idea of what human flesh tasted like based on interviews with cannibals. I had to start somewhere. Turns out, opinions were mixed.

German cannibal Armin Meiwes likened the taste to pork. Meiwes, who’s serving a life sentence after killing and eating a man, told Spiegel Online that the meal consisted of human steak in green pepper sauce with croquettes and Brussels sprouts. Pork, got it.

But what about the green pepper sauce? What if it altered the taste?

Journalist William Seabrook traveled to West Africa in the 1920s for his first taste of human. Seabrook, though, described the taste of human flesh as something more veal-like.

Alfred Packer, perhaps the most well-known cannibal in the United States, was the first to be convicted of the crime. In 1874, Packer got stuck in the High Rockies in Colorado and lived off the flesh of five other men in his party until he made it back to civilization.

Packer described it as “the sweetest meat” he’d ever tasted, and favored the breast tissue. Omaima Nelson echoed the sentiment, calling human ribs “so sweet” in a Los Angeles Times report.

The taste of human flesh, as it turns out, is somewhat subjective.

I gave up on finding a serious pairing and instead asked for help from a professional or three. None, oddly enough, were willing to help in this quest to find the perfect match for a nice plate of dick.

My suggestions: a nice and heavy Bordeaux. Preferably a Saint Emilion Grand Cru. It is a very strong taste with vanilla and berries as aftertaste. Would go well with even a very limp dick.

A sauterne for when the dick is halfway there. It is sweet and thick and really brings out the flavor of a freshly washed dick.

If you have a fresh dick that is eager to perform you could pair it with a Beaujolais primeur. It is a younger wine that will energize even the tired.

When you’ve got an older and less fresh dick I’d recommend a Pinot noir. It is a white wine with earthy undertones that usually pairs very well with lobster, trout, or an old smelly dick.

Thanks guy who signs my paychecks.

As entertaining as Boris’ answers were, and I found them to be pretty entertaining, I was still curious. Out of options I had one more shot at a legitimate answer to this question.

I reached out to Gary Vaynerchuk, who I know to be both a wine expert and a guy with a taste for weird content. He delivered.

Clearly, Vaynerchuk says, the only correct answer is a wonderful Cahors from France. Cahors, a red wine from grapes grown in or around a town in France that shares the same name has a history dating back to 50 BC. It’s dark, leading to the “black wine” nickname earned centuries ago.

As for why Vaynerchuk chose this as the best pairing for for McAfee’s dick… it’s “spicy.”