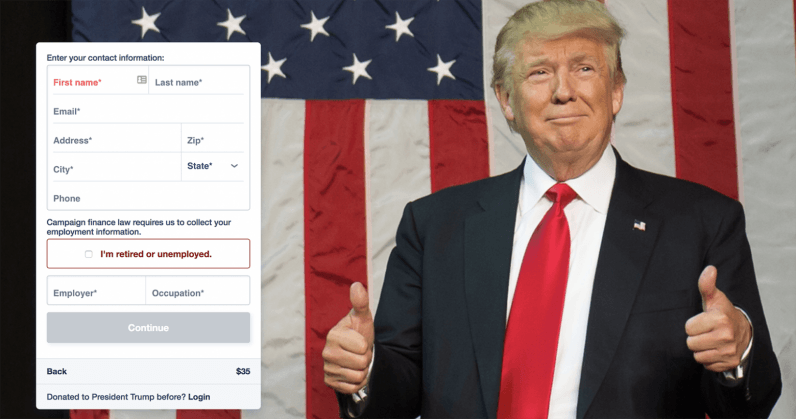 As President Donald Trump gears up to deliver his first State of the Union Address, it’s his campaign manager, not the President, that should be sweating. Trump has little to lose. He is who he is, and we’ve come to expect nothing less than a circus each time he’s behind a podium (or a mobile keyboard). It’s been a tumultuous year, but tonight offers an opportunity to right past wrongs, to take the stage, calm and collected, and deliver a speech that inspires confidence in a divided country.

It’s a chance to prove his stable genius.

Instead, the Trump campaign seemingly felt it best to turn the annual address into a telethon.

According to Trump’s campaign website, for only $1 you can have your name displayed during a livestream of the State of the Union Address. The original asking price was $35, but a subsequent mailing to the President’s email subscribers now has a link to contribute as little as $1 to have their name displayed on air.

According to the campaign email, who CNN reports to have been sent by Eric Trump:

Even if you choose to only give $1, the proof of your support will send shockwaves around the world as they see every American who proudly stands behind our President. So before the speech, make your contribution of just $1 to have it displayed right under the livestream of the President’s State of the Union.

Donors who decide to part with their hard earned beer money will have to supply their name, address, phone number, workplace occupation, and credit card number.

It’s unclear whether “name” can be any text, but I’m sure Reddit and/or 4Chan is hard at work figuring that out. Also unclear is how the information is being vetted. It’s doubtful any vulgarities will appear on screen, but with Trump it’s never wise to make assumptions.

At the very least, it offers a digital lottery where you can pay $1 to shout obscenities at your television screen during the speech. And whatever doesn’t air still has to be documented by the unfortunate campaign worker charged with keeping records for the Federal Election Commission.

Or maybe you should just send a letter.

Read next: Facebook bans cryptocurrency ads because they're mostly scams