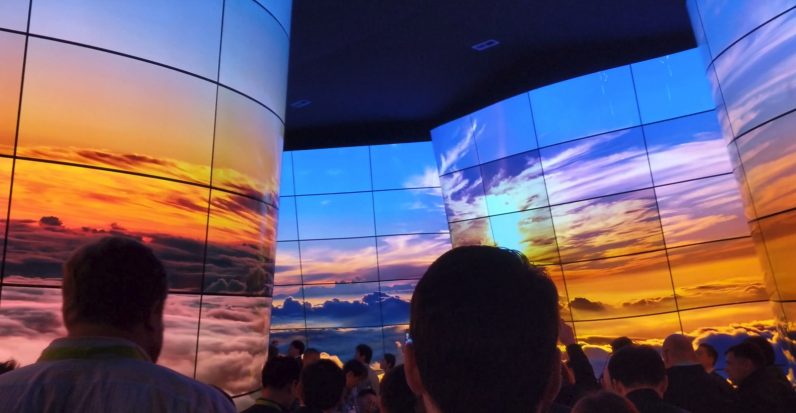 For all the buzzwords surrounding television, I’ve feel like TVs have been kind of boring for a while. I’ve attended CES four years in a row, and it seemed each event basically refreshed the same basic units with only mildly tangible improvements. Sure, I’d ogle at the bombastic displays setups and panels I could never afford, but most improvements of the past years seemed more iterative than groundbreaking – or even just interesting. And then CES 2018 came along. This time around, the race wasn’t just on to see who could push more pixels, colors or nits – differences most consumers likely won’t even appreciate – but instead to make TVs more practical or unique.

Monitors and TVs have spent most of their existence as disparate cousins, each with unique strengths. If you wanted a big screen and fancy tech like HDR (at least early on) you had to get a TV. If you wanted low input lag and high refresh rates, you had to get a monitor. But they’re just screens right? Why can’t we have it all? It’s a question I’ve been asking for years, and Nvidia is finally answering our prayers with its new BFGD’s. Essentially these combine the specs of a gaming monitor (120hz refresh rates, ultra low latency, G-Sync) with the spectacle of a TV (65-inch size, 4K HDR, Quantum Dots tech).

I only had a few minutes with HP’s BFGD, but that was enough to convince me I need one of these. In fact, my only complaint is that the size might be a bit too big, but that’s just me being selfish because I’m not sure my TV mount can handle a 65-inch screen.

Arguably the most impressive display at the show, Samsung’s ‘The Wall’ fulfills another long-held display dream of mine: a completely modular display. The wall is essentially composed of several smaller panels, which can be arranged in different sizes and shapes – the unit on the CES floor was a whopping 146-inches. While Samsung revealed nothing about how easy it would be to rearrange or add modules, a demo video did show off the TV in different sizes and aspect ratios.

The company seems to want to fulfill the sci-fi dream of having screens that completely take up, well, a wall. And don’t worry, it looks fantastic too – the Micro LED technology is functionally very similar to OLED, able to hit pure black, but with an advantage in terms of brightness. It’s worth mentioning this is far from an original idea; Samsung, Sony, and others have all shown similar tech aimed at theaters, and it’s basically the same concept as large video billboards. The difference is Samsung actually intends to bring the wall to market very soon; a launch event is planned for March. Expect it to cost an insane amount of money, but it might just change the way we think about buying and using our TVs.

LG’s roll-up TV will save a ton of space

TV’s take up a lot of room, especially now that 50+ inches is the norm. What if your TV cold simply fold away into a box not much larger than a chunky soundbar? LG Display – a sibling company to the more familiar LG Electronics – created a rollable TV that fulfills that dream. It’s a 65-inch OLED panel that seems to look just as good as LG’s other high-end TVs, but can be folded up when not in use. While the OLED panel itself is flexible, the rear of the display is made up of various slats laid horizontally to keep the screen from bending while in use. https://www.youtube.com/watch?v=A-Yumjyd-Fs As someone who lives in a tiny NYC studio, every bit of space saved counts. Even if I had more room, I’d like to spend less time looking at a giant black rectangle. Another neat trick – the screen can partially roll back into its box to change aspect ratios and avoid letterboxing. Flexible displays are nothing new for LG, but the company seems closer than ever to having the technology ready for public use.

Google is finally paying some attention to Android TV

While Google has devoted a ton of resources into promoting Chromecast, Android TV has gotten something of a short stick. Which has never made sense to me, because Android TV does everything Chromecast can do and more. Until this year, only a handful of manufacturers have embraced Android TV – pretty much only Sony and the ill-fated LeEco in the US, and a few of other manufacturers elsewhere. But at CES, Google announced Changhong, Element, Funai, Haier, Hisense and Westinghouse are joining in on the fun. And since the aforementioned BFGDs run on Nvidia’s Shield platform, they’ll be sporting Android TV as well. Moreover, Google is integrating the Google Assistant into these TVs, which makes a tremendous amount of sense; the TV is a core gadget in many households, and will save a fair number of people from having to invest in Google Home devices for Assistant functionality.

Great as modern TVs may be, there’s still something awesome about watching movies on a giant projection. Short throw projectors have become increasingly popular to help you save some space without having to set up a hanging projector system. LG showed off a short-throw projector (HU80KA) with impressive specs: 4K resolution, 2,500 lumens, and HDR support. Moreover, it’s actually somewhat portable, and even comes with a handle to lug it around.

Then there’s Sony’s $30,000 behemoth, which can create a 120-inch display with a peak brightness of 2500 lumens. It’s clearly a luxury product, but the design integrates premium speakers as well.

There have traditionally been two arguments against buying a 4K panel – our eyes can’t discern the improvement over 1080p from afar, and they’re too expensive. That latter argument is going away. Westinghouse showed off 4K Android TVs for as little as $350. Although they don’t include HDR, from a brief demo image quality was solid enough that most people won’t care. Meanwhile TCL’s new Roku-powered 6-series looks to be one one of the best bang for-buck performers. https://www.youtube.com/watch?v=v1rF7bbVcXY&feature=youtu.be Its predecessor, the P6, was one of 2017 best values for 4K HDR performance with local dimming, and the new 6-series seems poised to hit the same ~$650 price point with better design and image quality Basically, getting a really good 4K TV is going to be cheaper than ever, and it’s refreshing to see manufacturers are taking chances with more daring form factors and features. There’s arguably no need to up the resolution past 4K (some think 4K was even unnecessary), so it’s about time TV’s started to evolve in better ways.

Read next: 'Bloggergate' fiasco leads Dublin hotel to ban bloggers in the most hilarious way possible