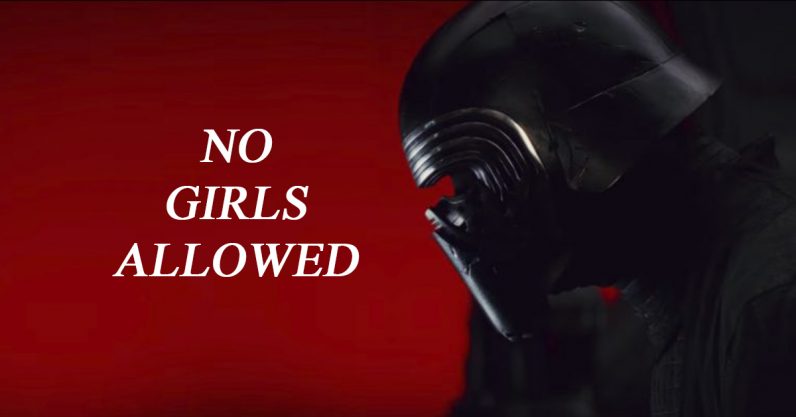 In what may be the stupidest cry for ‘equality,’ and the worst conflation of unrelated issues we’ve seen, a female-free recut of “Star Wars: The Last Jedi” is making the rounds. It’s dumb, the person who made it is misguided, and the men’s rights movement should be ashamed it exists.

The new cut weighs in at a lofty 46 minutes (down from 2.5 hours) and features sweeping cuts anywhere that a creature with boobs appears (save, a few scenes, including an action sequence with General Leia Organa).

Vitriolic men’s rights activists (MRAs) have been storming the internet and raising hackles as of late, thanks to an influx of people jumping on the cause as a sort of disgusting counterpoint to the #MeToo movement that began last year.

One of the big talking points for the more ignorant among the movement has been to decry “The Last Jedi” as propaganda put forth by anti-Trump leftists.

Nope, not making that up. Here’s a few Tweets to get you started:

The Last Jedi was the nail in the coffin for the franchise. Political correctness and SJW Kathleen Kennedy murdered Star Wars.#StarWars pic.twitter.com/yEDlozZHVQ

Need a quick buck? Got a camera? Make urself a “The Last Jedi is SJW garbage” video and watch that YouTube money roll on in!

A reddit user, responding in a thread titled “The Last Jedi was full of SJW bull.” stated:

But the characters have to be diverse! Put one of everything in there so people can feel “represented.” Which is a load of horseshit. Does it *really* matter if a black guy is cast? Sure, it’s good for that particular actor. But it does nothing for the black community as a whole. Yet they will trumpet how wonderful and tolerant they are for casting one person in a movie no one will care about a couple of months from now. It’s meaningless and empty, just like most things on the left.

If they genuinely wanted to help minority communities, you need to have education, job training, and that sort of thing. (I am totally for that, by the way.) Simply putting someone of a particular background in a movie doesn’t amount to anything.

It’s probably a safe bet to say the Star Wars franchise was never intended to be a platform for education and career placement to members of minority communities. The sentiment is clear, however: white men are the default for all characters in fiction, any deviation should be only done out of neccesity.

Afterall, blackface isn’t socially acceptable anymore. Someone has to play the drug addict or terrorist in the next big testosterone-fueled action flick (women can be in that film too, but only if they’re chained to a giant slug and bikini-clad).

It’s sad that someone would use a strong female-empowering performance to make a statement on feminism by cutting the hard work of The Last Jedi’s talented cast into an incomprehensible mess of random action scenes. It’s sad, but Daisy Ridley probably isn’t losing sleep over it.

The real tragedy is that these MRAs could actually do some good in the world.

But it’s easier to watch Star Wars, get pissed off that the main characters no longer resemble you like they did when you were a child, and blame the whole thing on Obama and Hillary. Or something.

If it really bothers anyone that Daisy Ridley plays the main character or John Boyega is black, I’ve got some really simple advice for you: grow the fuck up.

Read next: What the NY Times got wrong about Bitcoin