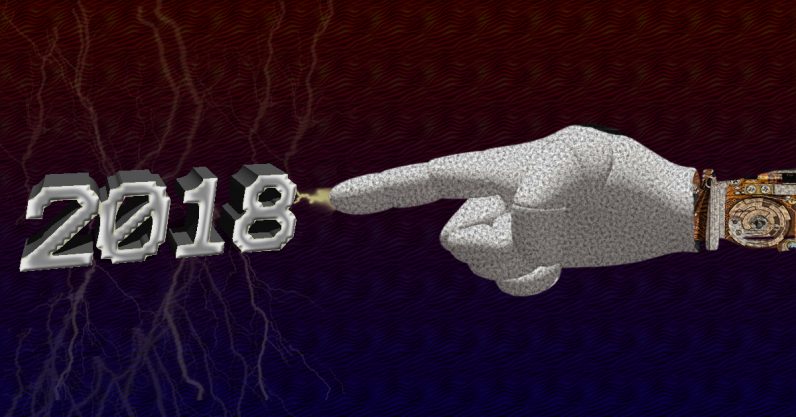 Perhaps no other technology was as disruptive as artificial intelligence in 2017. ‘Machine learning,’ ‘neural network,’ and ‘data bias’ became commonplace terms in the headlines of mainstream media outlets, signifying the machines had arrived. And with them comes an uncertain future.

We reached out to several experts to tell us what to expect from AI in 2018.

Robotics will change in 2018

2017 was about toy robots and programmable robots for kids. These educational robots make a lot of sense from a business perspective— there’s a big market for STEM education toys and they’re more affordable to produce as they don’t require massive CPU, lots of sensors or advanced AI.

In 2018 however, we’ll see more and more consumer robots aimed at adults. This will take two tracks. First, we’ll see robots that remove friction from our daily lives, mostly in the form of home helpers. And second, we’ll see more programmable robot platforms, which differ from those for kids in that they’re more sophisticated in their capabilities and can therefore yield more interesting robotics functionality. These programmable robots will appeal to a larger market, as they allow people to personalize their robotic experience.

We’ll see at least one more fatal accident involving autonomous vehicles on the roads, and a realization that human-level autonomous driving will require much longer to test and mature than current optimistic predictions.

The handoff problem – the point at which the AI hands back to human control – may be the biggest problem of 2018/2019, the solution lies in a complex combination of UX and human monitoring AI.

The self-driving shuttle bus that crashed on day one was in fact backed into. Learning to understand how the road looks in multiple weather conditions is one thing, understanding how humans then adapt their driving patterns and accounting for them is another. Automotive AIs will have to learn human behavior to navigate through humans on the road safely.

Emotion AI will increase our humanity and empathy for each other

In recent years, the smartphones, bots and devices we spend so much of our time with could be accused of contributing to the desensitization of our society. When a fight breaks out, some teens’ first reaction is to pull out their phone and take a video, rather than call for help. We can yell mean things at our Amazon Alexa without any consequences. These are just a few examples.

In 2018 and beyond, this will change. As Emotion AI is embedded into more and more conversational interfaces and social robots, no longer will it be socially acceptable to scream angrily at Alexa. She might respond with something like, “please don’t yell at me, that hurt my feelings.” As technology becomes “more human” so, too, will our interactions with one another. We will come full circle, and empathy will soon be back at the center of how we connect and communicate.

More agents will quit because of work overload

For example, a live chat agent can look through a chatbot transcript to see where the chatbot didn’t understand the customer. The agent can tag an intent to that particular phrase. This additional task exacerbates an already complex list of responsibilities, applications, and processes that today’s agent must own, use, and follow. Without the right tools, metrics, and campaigns, companies put employee experience at risk.

A political automation backlash will briefly impede progress — and lose.

The impact of automation is becoming more obvious to everyday workers. In 2017, 65% of Americans believed that other industries would suffer because of automation, but that theirs would be unaffected.

2018 will accelerate the hot-button political issue of automation as workers realize nearly all jobs will be affected. Anxiety related to technological unemployment will grow, prompted by personal experiences with software automation and, increasingly, customer service automation like kiosks and robots. Automation will win regardless — because its economic value outweighs any political resistance.

Bias check will become the next spell check

In the short-term, we’ll see AI applied to hiring and promotion procedures to screen for conscious and unconscious bias. Meanwhile VR will increasingly be used as an interview tool to ensure opportunities are awarded on merit alone, e.g. by masking a prospective employee’s true identity with an avatar.

By using emerging technologies to these ends, ‘bias check’ could one day become a routine sanitizer, like ‘spell check’- but with society-wide benefits.

In 2018 we’re hoping researchers and developers continue to push the cutting-edge of machine learning in order to produce computers capable of extraordinary things. The entire trajectory of the human race could be fundamentally changed in amazing and positive ways with the full-scale implementation of AI into our lives. The machines could also rise up and destroy us all, so carpe diem folks. Let’s make 2018 great for humans!

Read next: How will the digital revolution be advertised in 2018?