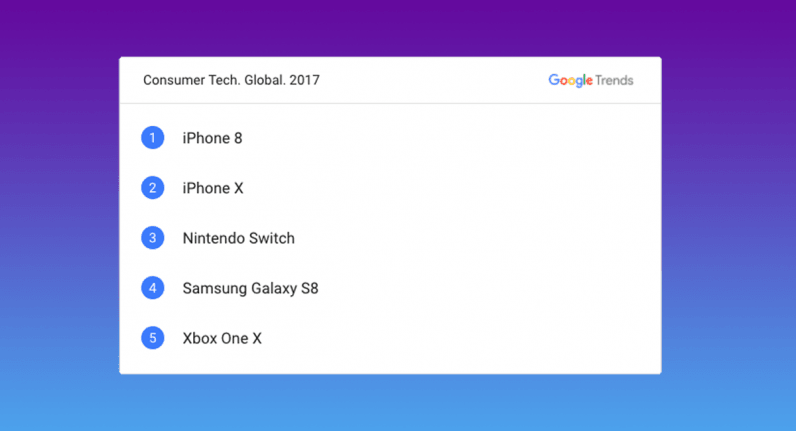 While all the talk around the this year’s iPhone lineup initially focused on the X and its unusual notch, Google has revealed that, contrary to the hype, iPhone 8 was the most searched piece of tech across the globe during 2017.

The revamped Nokia 3310, the sturdy Razer Phone, Oppo F5, OnePlus 5 and Nokia 6 round up the latter half of this year’s top 10 most searched consumer devices.

One thing to keep in mind is that the statistics reflect the most searched terms on Google throughout the year so far.

With this in mind, it makes sense that the iPhone 8 scored higher than the flashy X, taking into account all hype and speculation that usually comes along with every Apple hardware release – and especially with its flagship phone. Perhaps things would’ve been different if everyone had known the premium iPhone will be called the ‘X’ in advance.

Interestingly, the Razer Phone managed to gather enough interest from the public to make it in the top 10, despite its relatively late launch in November.

Those curious to check out some other interesting stats and numbers for the most searched terms in other categories like news, elections and entertainment ought to head to Google Trends’ yearly report here.

Read next: Zolo Liberty review: Half the price of AirPods, but equally compelling