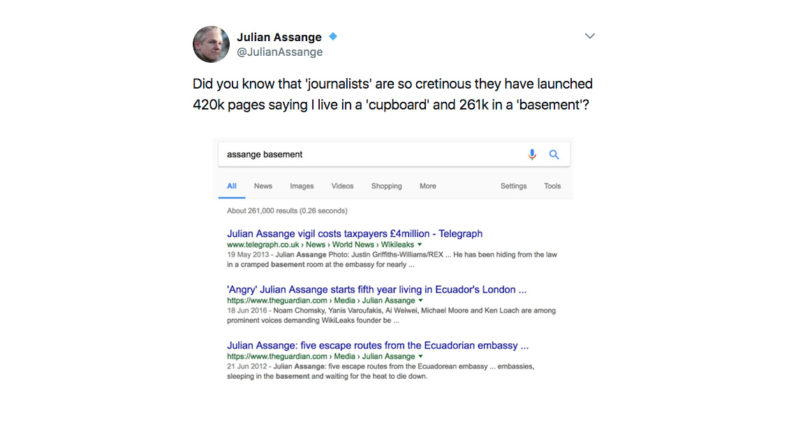 As the founder and director of an organization dedicated to unmasking the shady actions of governments and public officials, Wikileaks’ Julian Assange seems to be unusually preoccupied with insignificant shit like getting a fake “verified” badge on Twitter or offering tips on how to stare at the eclipse.

In a similar vein, earlier today Assange took to Twitter to vent his frustrations about the “tropes” so-called “journalists” have been spreading about him. What he notably took offence with were the “cretinous” claims that his asylum abode in the Ecuadorian embassy in London was actually a ‘basement’ – or a ‘cupboard.’

Following a brief Google lookup, Assange discovered that, in addition to the 420,000 pages painting his London residence as a ‘basement’ or a ‘cupboard,’ there were approximately 62,000 instances describing his bedroom as the “ladies toilet” and equating his stay at the embassy to an act of “hiding.”

Unhappy with the descriptions, the Wikileaks editor-in-chief wanted to set the record straight:

Did you know that 'journalists' are so cretinous they have launched 420k pages saying I live in a 'cupboard' and 261k in a 'basement'? pic.twitter.com/TVk8UVTGe4

He then went on to ruminate over what could be the reason behind “this unprofessionalism.” This is when he cracked the code: “Imagining me stuffed in a cupboard soothes the pain.”

For those confused, Assange was hinting that, similarly to the way the media clowns Putin for his short stature and Trump for his tiny hands, journalists tend to undermine his (illusions of) grandeur by portraying him in positions of weakness.

Another factor that appeared to back up this truth was the fact that the “cupboard snowflakes” of journalists routinely resort to avoiding mentions of his impressive height (6’2”); you know, in an effort to reduce the psychological threat his omnipotent online presence poses to them.

Are there any studies on this phenomena of using physically confining metaphors to produce comfort when referring to a threatening entity?

As some Twitter users have already pointed out to Assange, limiting the search criteria to ‘news’ pages reduces all basement-associated mentions of his name from 260,000 to less than 10,000. But no, it’s all the media’s fault.

In her latest documentary Risk, filmmaker Laura Poitras – known for her documentary on Edward Snowden, Citizenfour – depicted Assange in a constant state of troubled calmness. His moods fluctuated from enthusiastic, to miffed, to pensive, to absolutely paranoid and vice versa.

But what was particularly striking, was the unadorned way in which Poitras portrayed how even his closest trustees were gradually starting to doubt whether he is still fit to steer the ship. The worst part was that Assange appeared to be blissfully ignoring their lack of faith – or perhaps he never even noticed it.

The Wikileaks leader has spent the last five years of his life holed up in the Ecuadorian embassy – without any clear prospects to leave.

While he might deny this description, Assange is practically an inmate in the embassy. And when you posses ego and ambition as big as his, being stuck in a box for so long could start playing tricks on your mind.

Researchers have long been exploring the impact prolonged confinement to enclosed spaces has on the human psyche. Among other things, inmates eventually exhibit signs of diminished impulse control, hypersensitivity to external stimuli and intense paranoia.

And it seems that akin to prisoners, Assange, who by the way stands 6’2” tall, has been locked up in the basement for far too long… and he desperately needs more space to shake off the jitters.