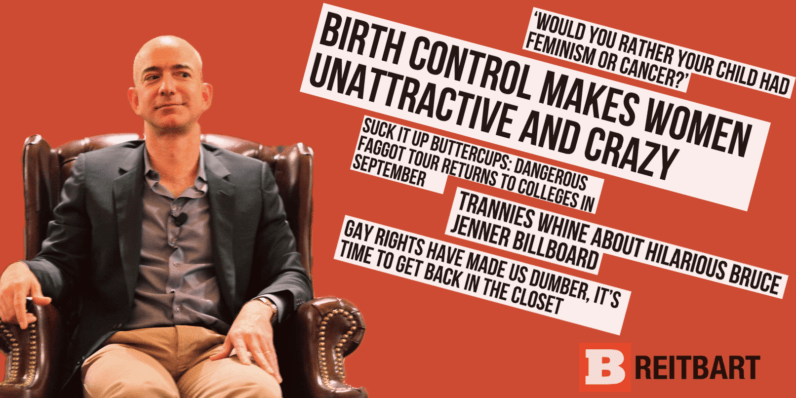 An activist group this week released a list of nearly 2,600 companies who have pulled ads from Breitbart News. The group, known as Sleeping Giants, pointed out one notable commission: Amazon, who continues to advertise on the site as of this writing.

Sleeping Giants has, for months, encouraged its following to screencap images of ads on objectionable content and tweet at the company involved. Over that period, the organization claims to have coaxed 2,575 (as of this writing) companies from cutting financial ties with the hate-mongering website.

It released the list, in its entirety, on Monday.

Breitbart, the black hole of the internet, has drawn criticism for its use of sensationalist content — content that often features racist, misogynistic, or outright mean-spirited spin. Take these headlines, for example:

In recent months, it’s become the so-called home of the alt-right, a term that’s come to define the new generation of White Nationalists including the KKK and Aryan Brotherhood, among others.

Amazon, it’s worth noting, isn’t paying Breitbart directly. Like most other companies on this list, it relies on brokers to display advertisements on properties all over the web. While targeting a specific website isn’t uncommon, it’s not standard practice.

Instead, companies often employ a “black list” of companies it doesn’t want its ads shown on — which is how over 2,000 companies ended up ensuring their ads didn’t appear on Breitbart.

For Breitbart, Amazon could be one of the last big chips to fall. The company is already “bleeding ad revenue,” according to The Week. “It’s a fight,” Breitbart editor in chief Alex Marlow told the New York Times.

If there’s reason for optimism, it’s that newly-ousted CEO Steve Bannon will soon rejoin the site. Based on his previous body of work, I’d caution against it, but Bannon reportedly plans to reshape Breitbart into a respectable news organization that’ll cater to the audience right of Fox News — which, best as we can tell, includes anyone dressed in white and carrying a tiki torch at the Charlottesville rally last week.

As for Amazon, our sources tell us that internal pressure is mounting. Employees are calling on Jeff Bezos to cut ties, as are celebrities on Twitter.

We’ve reached out to Amazon for comment, but that request has gone unanswered as of this writing. We’ll update this article if needed.

Read next: The Church of Satan has one hell of a social media team