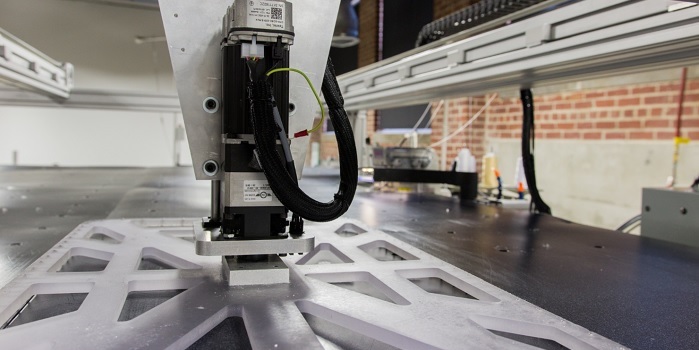 A robotic sewing system will soon produce hundreds of thousands of shirts for Adidas, which could potentially change textile manufacture.

The machine — called a “Sewbot” uses cameras and bots to cut and sew the soft fabric, a task which has eluded other forms of automation. Until now, the task was still best-suited to humans with sewing machines. According to Softwear:

The machines use a combination of cameras and needles to track the placement of a fabric before sewing the apparel at a reported higher level of accuracy than the human eye.

Here’s what the Sewbot looks like in action, making a pair of jeans:

The bot itself comes from Atlanta-based company SoftWear Automation, which was awarded a $1.25 million DARPA contract in 2012 specifically to develop the technology. Chinese company Tianyuan Garments will use the bot at its plant in Little Rock, Arkansas.

We will install 21 production lines. When fully operational, the system will make one T-shirt every 22 seconds. We will produce 800,000 T-shirts a day for Adidas … Around the world, even the cheapest labor market can’t compete with us. I am really excited about this.

This is a boon for domestic clothing manufacture, and it could mean that clothes — from Adidas, at least — are about to get a whole lot cheaper. It’ll also likely mean that thousands of people are about to lose their jobs.

If a robot can make that many shirts for a major company daily, what will that do to the economies based around textile work?

Read next: Going beyond Bitcoin wallets: These apps give you better control over your cryptocurrency-based finances