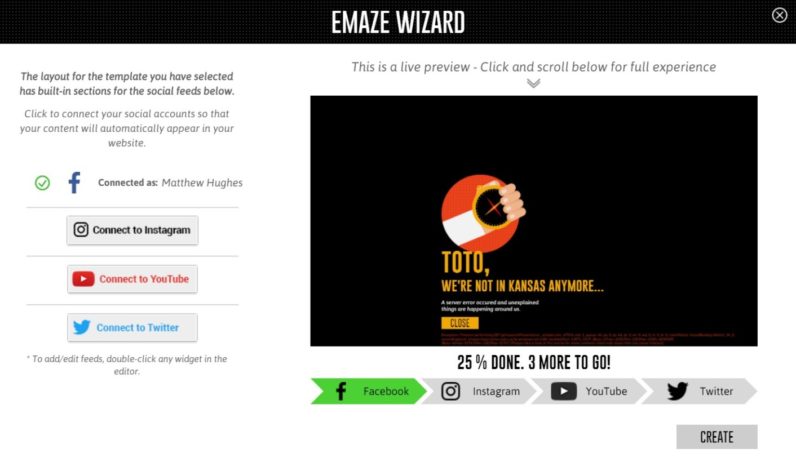 If you don’t have the time to create your own website, and feel about.me is a bit too limited, you might want to check out Emaze, which allows you to create your own personalized homepage in seconds simply by importing data from your social media profiles.

Emaze was originally created as a platform to create visually eye-catching presentations; similar to the now-ubiquitous Prezi. Since then, the service has expanded to encompass personal websites. These can be created without a single line of code, as is the case with SquareSpace and Wix.

The site offers a range of customizable templates, each geared to different interest groups, like sports, fashion, and ‘influencers’ (I hate that term.)

Once you’ve picked the template you want, Emaze automagically populates it with content from your social media profiles. The ‘big four’ social networks are represented, allowing you to link it to your Facebook, Twitter, Instagram, and YouTube accounts, and the entire process takes a matter of seconds.

Sadly, Linkedin isn’t an option. That’s a little curious, considering the site so explicitly targets ‘influencers,’ as the company’s CEO David Edri told me. But it’s also somewhat  understandable. It’s not a particularly visual-heavy site, and while it’s increasingly used as a blogging platform, people don’t tend to share photos and videos through LinkedIn.

Once you’re finished, Emaze will auto-generate your homepage. It’s at that point, the work truly begins, as you customize it to your needs. This is mostly a matter of filling in the blanks — there’s a lot of generic stock text — and removing the elements you don’t particularly care about, like background images and links from the navigation bar.

The wizard also lets you view your site from the perspective of a mobile user, and tweak accordingly.

As you’d expect, you can do an awful lot through these editors, and every theme can be overhauled and rebuilt to the user’s needs. It supports 3D, parallax, video, and pan and zoom designer layouts, and you can insert live social media feeds.

Once you’re finished, you can make it public to the world by hitting ‘publish.’ This will be served under the emaze.me domain, but if you wish to link it to your own, that’s an option. As is the case on about.me, this is a paid extra, and costs $12.50 per month, billed annually.

Speaking over email, David Edri, CEO of Emaze, explained that he envisions the service as a home for YouTube and Twitter celebrities who need to build an online presence outside of these siloed services.

An influencer who has 30,000 followers on one social network is often seeking opportunities to build themselves on other social media channels allowing them to get campaigns with large brands and corporations. An Emaze.me site would allow this influencer to create a unique brand identity that extends beyond a single profile. Furthermore, it will allow them to promote their other social media platforms and grow their followers there as well.

Right now, Emaze satisfies a particular niche. It’s drag-and-drop environment isn’t too far from what you’d get with Wix and SquareSpace, although it has a much more pronounced bent towards social media. Arguably, what sells it is the wizard, which lets you bootstrap a site with your own content in just a few seconds.

Not only does this save you time, but it also dispenses with the inevitable ‘writer’s block’ which sets in whenever you start work on your own online presence.