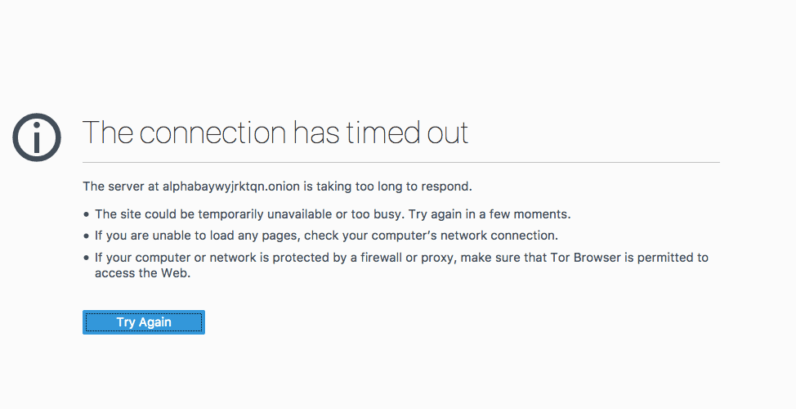 It appears the largest dark web drug and counterfeit marketplace might be pulling off a Houdini. Numerous users on Reddit and Twitter are speculating that AlphaBay Market – often dubbed as the new Silk Road – has executed an elaborate exit scheme.

Doubts first began circulating when the portal suddenly went offline earlier today. While experiencing down-time is nothing unusual for AlphaBay, some users have since come across a massive Bitcoin transaction worth over $3.7 million that many believe could have originated from AlphaBay.

What complicates the matter is that such transactions are often anonymous, which makes it difficult to trace the origin and destination of the transfer, or the parties involved.

While some users are passing off the link to the transaction as definitive proof of AlphaBay’s intentions to make off with all of its users’ funds, others are convinced the two events are not connected.

for those of u not believing the alphabay exit scam, heres PROOFhttps://t.co/Ang7R5TjU4

Dark market website Alphabay is down but I cannot find any evidence that the multisig address being circulated is connected to their site.

Stop Talking about this stupid Address with ~1,400 BTC without any research (I did it for you) from AlphaBayMarket

Details remain hazy as of now, but such heists are not out of the ordinary on the dark web .

Two years ago, a Silk Road competitor better known as Evolution suddenly vanished out of thin air, making off with millions of dollars worth of Bitcoin – all owned by the users, of course.

In an unrelated case, earlier this month Homeland Security investigators reportedly busted a high-profile AlphaBay vendor that had purportedly conducted more than 1,600 drug sales on the platform, grossing over $1 million in revenue.

Update 13:13 ET July 5: AlphaBay continues to be down, according to users on Reddit and Twitter. AlphaBay representatives, who appear to be otherwise quite active in the underground community, have remained silent so far.

Update 16:45 ET July 5: While the dodgy marketplace is still experiencing downtime, an AlphaBay-associated Redditor going by the moniker Big_Muscles has alerted concerned users that the “[s]ervers are under update” and “[w]ill be back online soon.”

Update 03:45 ET July 6: Several alleged AlphaBay members have since chimed in to assure users the website will be up and running shortly.

Following discussions with the marketplace’s developers and web admins, staffer trappy_ab claims the team is “working to restore AlphaBay as soon as possible.” He also took a chance to warn users against the heightened spread of phishing attacks and “fake” vendors.

In a similar vein, another associated representative more commonly known as BigBoyRoy1 has backed up the claims of Big_Muscles and trappy_ab, denying any exit scam allegations. The user brushed off the lengthy downtime window due to the intricate server setup. BigBoyRoy1 further claimed the decision to move the Bitcoin funds to another wallet was a safety measure.

Read next: How Israel’s desalination technology is helping the world fight water shortage