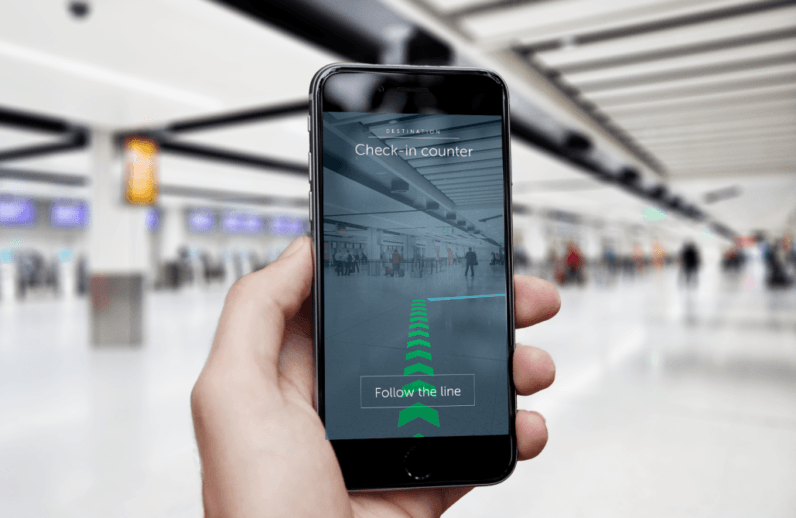 Serving the London region, Gatwick Airport is the UK’s second busiest airport, after London Heathrow. As you’d expect, it’s a gargantuan place, and getting around its two massive terminals can be a nightmare.

To ameliorate this, Gatwick has taken the unusual step of installing 2,000 bluetooth-powered beacons that tell passengers where they are in the airport’s two terminals.

The beacons are the product of a collaboration with London startup Pointr, and are accurate to three meters — so pretty damn accurate.

The first incarnation of the system shows travelers where they are on a digital map, with their location visualized as a blue dot. Gatwick eventually intends to introduce an augmented reality system that guides users with turn-by-turn directions, using real-world visual data.

At first, Gatwick plans to integrate this network of beacons into its own app, and is in talks with airlines about sharing access to the data.

Conceivably, this could be used to tell passengers that they’re running late, or help the airline to figure out whether to offload luggage if a late passenger is far away.

The airport also intends to use the data from the system for its own purposes — like queue management and reducing congestion. Although it is eager to say that it won’t be collecting any personal data from the beacons, but rather “generic information on ‘people densities’ in different beacon zones.

Gatwick Airport also intends to offer retailers access to the system for proximity detection, for marketing purposes. So, if you walk past the duty free shop, don’t be surprised if your phone starts telling you about offers on Grey Goose, Johnnie Walker, and giant Toblerones.

Gatwick Airport now has 2,000 beacons for indoor navigation on TechCrunch

Read next: Why Wendy Williams is going digital