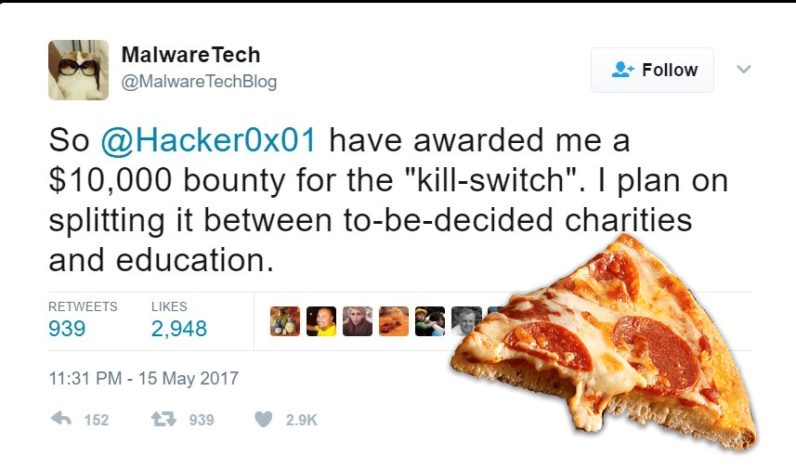 Karma is real, I’m convinced of it. UK security researcher MalwareTech is living, walking, hacking proof of that.

The white-hat hacker was responsible for stopping the rampage of the WannaCry ransomware, which last Friday wove a path of devastation across the globe. In the UK, it brought the National Health Service to its knees, delaying procedures, and forcing hospitals to redirect patient to unaffected hospitals. In Spain, it devastated the country’s biggest phone network, Telefonica, as well as accountancy firm KPMG and retail bank, Banco Santander.

I wasn’t impressed with how he was treated in the aftermath. The British press essentially doxed him, stripping him of his anonymity and privacy.

Thankfully, he’s getting the love he deserves. First, Hacker One, a major bug-bounty service, said they’d give him $10,000 for his effort. MalwareTech, being the stand-up guy he is, doesn’t plan to keep a penny. He said that he intends to split the money between an as-of-yet undisclosed charity, and infosec books for low-income students.

So @Hacker0x01 have awarded me a $10,000 bounty for the "kill-switch". I plan on splitting it between to-be-decided charities and education.

By education I mean I plan to purchase infosec based book to give to students who cannot afford them themsleves.

And JustEat — which is a bit like the Seamless of the UK — offered MalwareTech a year’s worth of free pizza.

MalwareTech, allow me to add another offer to the list. If our paths ever cross, I’d love to buy you a pint. Several, actually.

Read next: Design with a mobile user in mind with this cross platform training — pay what you want