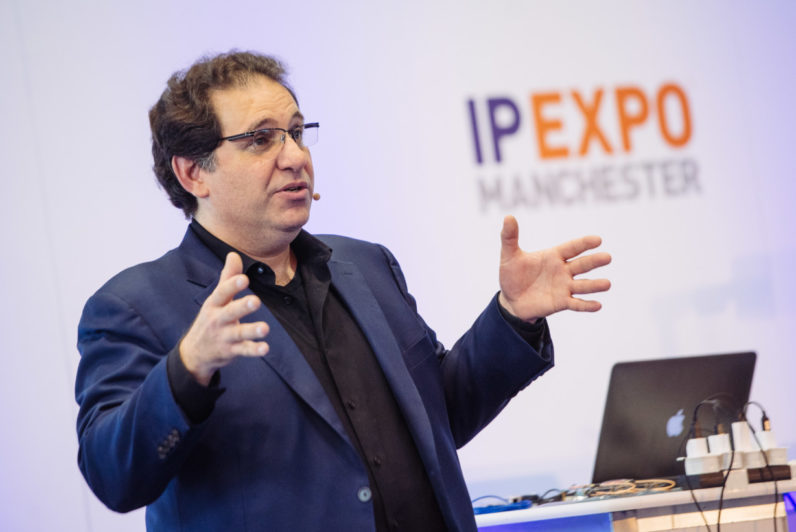 In the 1990’s, Kevin Mitnick was the world’s most wanted hacker. At the height of his infamy, he was the subject of a manhunt that dragged on for over two years. When US authorities finally captured him, prison administrators placed him in solitary confinement over fears he’d launch an ICBM strike by whistling dial tones into the facility’s payphone.

Today, he’s still the world’s most wanted hacker. The only difference is he’s gone legit.

Last Wednesday, Mitnick gave the keynote address at IP Expo – an information security trade show, held in the splendor of Manchester’s Central Exhibition Center. Delegates were so eager to hear his talk, the event organizers set up overflow rooms to cope with the demand.

I was due to interview him at 1 PM, but Mitnick showed up late. It took him about 15 minutes to makes his way to the press room due to the throngs of people desperate to shake his hand, ask him questions, or get one of his famous business cards – which are actually a set of lockpicks.

Mitnick hails from a purer time. Back then, hackers were known for their libertarian-leaning politics and intellectual curiosity, not for the more mercenary characteristics of today’s hackers.

In the halcyon days of hacking there was an real sense of optimism. There was an attitude that hackers could be one of the mechanisms that holds power to account. Something that was typified in the schlocky 1995 film, Hackers, and any edition of 2600: The Hacker Quarterly from that era.

But it’s no longer the 1990’s, and Kevin is no longer an inexperienced young man. He’s aware of the formidable, far-reaching nature of the United States government.

We talked a little about Lauri Love, the Anglo-Finnish hacker who is currently fighting extradition to the US over charges of hacking into computers belonging to the Federal Reserve, the US Army, Missile Defense Agency, and NASA. Mitnick isn’t confident that there’ll be a happy ending. “Once the US get a hold of you, they don’t let up. That’s it.”

He also noted that, if Lauri Love is to ever see his extradition attempt dropped by the US authorities, it’ll won’t be due to international pressure, but rather due to an arrangement with the British government. Citing the recent example of Gary McKinnon, the Scottish hacker who broke into 97 US Government and NASA computers in search of evidence for extraterrestrial life, he said:

“In the case of Gary McKinnon, I think the US made a deal with the UK – ‘if you focus your police efforts on Assange, we’ll give McKinnon a pass’. It’s not just some prosecutor having compassion. Something must have happened where the US said that if you help us, we’ll let your guy go”

Love’s only other hope, he said, was if that in catching him, the US government would have to expose one of its software exploits. This was in reference a case where the FBI dropped a case against a website involved in the trafficking of child sexual imagery, as they would have had to reveal their exploit against the TOR system.

Despite that, he remains convinced that individuals can be a force for transparency, and openness. He cited the example of Edward Snowden – even if that doesn’t always translate to policy change.

“I know Edward Snowden put his life on the line to expose the NSA’s illegal wiretapping. They were caught with their panties down, and exposed to the US… Exposed to the world. But will the government change? Absolutely not. Not in a million years. They’ll continue to do what they’re doing – what they did for centuries – spy.

At one point, something like 50 percent said they thought Snowden did the right thing. But did he get a pardon? No. He’s in exile in Russia. Honestly, I’m surprised they let Chelsea Manning go. Really surprised. Although she deserved it because 35 years was ridiculously long, and fortunately Obama gave her a pardon.”

Segueing into Manning, he said:

“She should be thanking her lucky stars. The US government is draconian. They locked me up in solitary confinement for a year because they thought I could launch a nuclear strike with a pay-phone which is obviously bullshit!”

Mitnick also expressed cynicism about whether those in the seat of power actually know how to protect us. An expert on the physical and human element of security, having authored several books on the subject, he expressed disdain for the recent electronics ban.

When I brought up the fact that the ban may soon be extended to Europe, he sighed. “That’s really going to suck.”

“I don’t check my computers. I refuse to. I don’t know how that’ll affect my travels, because if you check your luggage, there’s the risk that it’ll get compromised. You’re leaving it in the hands of government agencies. It’s now an issue of whether you move your stuff via FedEx or UPS or DHL, or leave it at home.”

You have to wonder how much of it is security theater? Because they don’t let you carry small pocket knives on the plane, but they give you cans of soda. I was in prison, and I know how to make a shank out of a can of soda. It’s not too hard. You just empty the contents out, and you turn can turn the sharp aluminum can into a weapon.”

Although he accepted that there was a possibility the ban is based on genuine intelligence.

“If you can sneak an explosive into a shoe, it stands to reason you’d be able to fit one into a laptop. I remember someone tried to sneak a bomb into a printer – which they caught.”

Kevin Mitnick’s latest book, The Art of Invisibility, is now available from Little, Brown. You can order it on Amazon today.