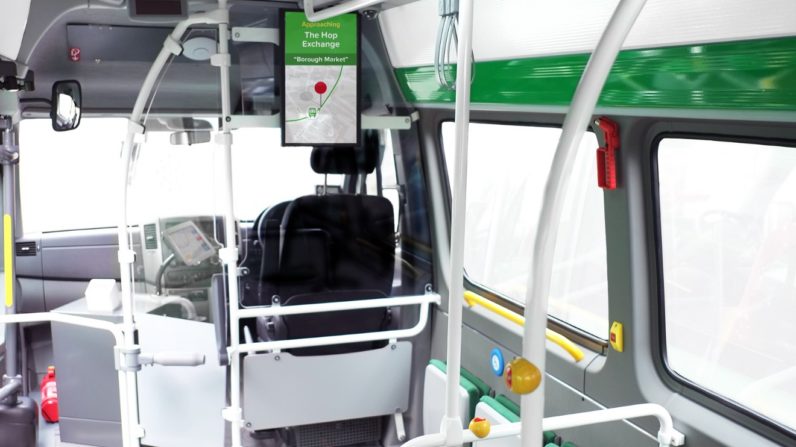 I don’t think anyone saw this coming. Citymapper — the developer of the popular public transport application — is launching its own bus route in London.

Wired UK broke the story earlier today, and you can read more about it on Citymapper’s blog. Essentially, the company is launching its own circular route around Blackfriars and Waterloo Bridge, using two different buses – one large, and one small.

From the passenger’s perspective, Citymapper’s CMX1 bus is scarcely different from the current offerings. It comes with a few bells-and-whistles that are nice. like large displays showing the next stop, and USB ports to charge your smartphone from.

Oh, and the buses are green, which matches Citymapper’s corporate colors.

It also comes with nifty tracking software, allowing you to see where the bus is through the app, almost like you would with an Uber. It also allows the driver to keep track of how many passengers are on-board, which makes complying with safety regulations a lot simpler.

“We built software for everything, including realtime operational control to driver management to scheduling systems. We’re reinventing how to think about all of these in the realtime world. We’ve taken systems that haven’t traditionally talked to each other and integrated them.”

Citymapper is merely testing the waters with this. Its experiment will last just two days, leading the company to call it a “pop-up bus route.” Due to the fact that it lacks the proper licensing, the it isn’t allowed to charge passengers.

The endgame for this is a bus network that’s fluid, and responsive to demand. To do that, it’s taking advantage of the vast quantities of open data that Transport for London (TFL) offers, and incorporating it with its own software, called SimCity.

It’s very clever stuff, and it’s indicative of where CityMapper is going as a company. It’s yet to actually make any money. Perhaps it sees its future not merely as a software tool, but as an infrastructure company.