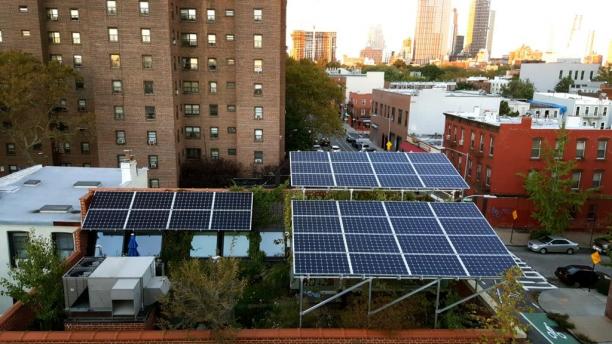 Most of us are aware of the environmental benefits of solar energy over fossil fuels, we’ve heard it numerous time: blah blah, cleaner air, blah blah, sustainability, and so on. You know, less world-endingly in general.

But adopting new energy sources won’t just mean cleaner energy, it can also lead to better utilization of the energy we’re producing. Many companies have been developing ways for solar panel owners to put their excess energy out into the grid, but LO3 Energy is taking it a step further.

To achieve this, LO3 Energy uses blockchain technology, which electronic currencies such as BitCoin are based on. By combining advancements in solar and blockchain technology LO3 Energy has taken a step to decentralize the energy market. The participants of microgrids have become less reliant on central repositories for energy production and transaction ledgers.

LO3 Energy’s founder, Lawrence Orsini spoke about the project at conference on blockchain, organized by MIT Technology Review. Orsini explained that the new system wasn’t simply about settling energy bills and that’s why blockchain is vital to their system.

Blockchain is a really good communication protocol for what we want to do. […] People can now make choices and decisions about how they want to participate in the energy market: peer-to-peer markets, community markets, and other interesting and new business models.

The microgrid is separate from the general grid, but operates along side it, which means that it can still function if the main one fails during storms or other catastrophes. Participants in the project install smart meters in their homes, outfitted with LO3 Energy’s technology, that measure generated and consumed energy and track automatic “smart contracts” using blockchain.

Brooklyn Microgrid launched over a year ago and has yielded promising results, but it’s still micro. Only 50 physical nodes make up the grid so it’s difficult to say when we’ll see larger scale peer-to-peer energy markets.

However, as we covered earlier, there’ll be similar experiments made in Australia later this year and huge conglomerates have shown interest in LO3 Energy’s work.