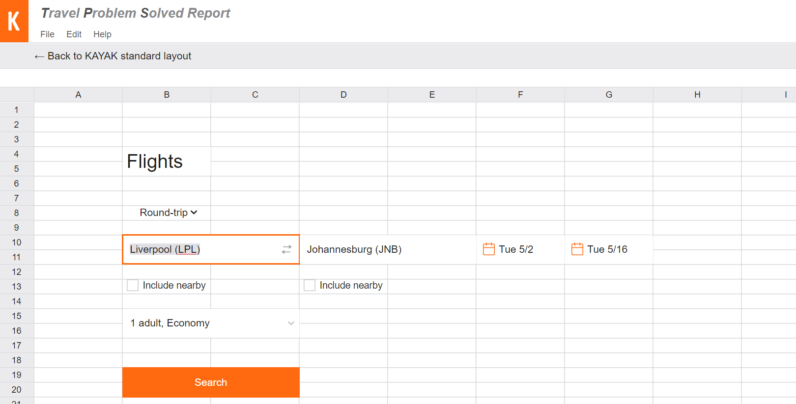 Everyone knows the feeling. You’re at work, only to wish you you were anywhere – literally anywhere – else. So, you decide to procrastinate by looking for flights.

The Priceline-owned travel site, Kayak, has noticed. And perhaps to avoid a spate of wanderlust-fuelled shitcanning, it has decided to launch Kayak at Work – a version of the popular search engine, that’s obfuscated as a Google Sheets spreadsheet.

The site works just like the mainline site; you can book cars, flights, hotels, trains, and package vacations. But the key difference is that should your boss pass by your desk, it’ll look like you’re hard at work crunching numbers.

While anyone taking a closer look at your desktop won’t be fooled, at a glance, it looks legit. The immediate resemblance to Google Sheets is uncanny.

According to Kayak, most workday searches happen on Tuesdays. Perhaps it’s because of the common myth that flights are cheaper on Tuesday (they aren’t), or perhaps because Tuesdays are just so god-damned awful.

The bulk of searches take place between 11am and 3pm, with most searches taking place on the desktop. Only 1/3 searches are done via a mobile browser.

And if you’re curious who is doing the most searches, it’s overworked employees in the beltway. Both Washington, D.C. and Richmond, Virginia are the two most popular cities for lunchtime searches.

Read next: Skype will now translate Japanese for you in real-time