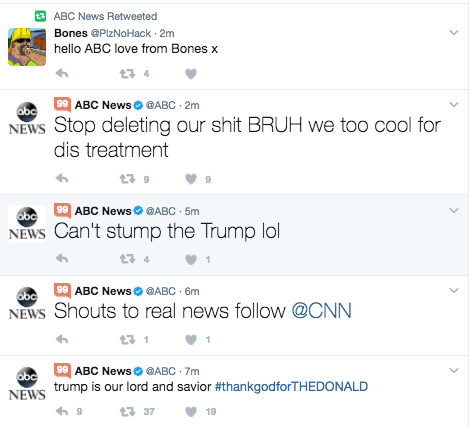 If there’s someone I definitely wouldn’t want to be right now, it’s the social media manager for ABC News. That’s because in the early hours of this morning, its Twitter account was hacked, with several colorful tweets posted.

Several of the tweets linked to an account, @the6clerk, which has since been suspended by Twitter. Others expressed a pro-Donald Trump sentiment, which I’m almost certain was tongue-in-cheek. 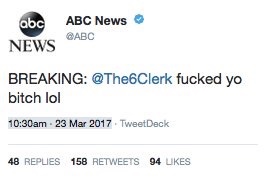 Even if the iconic broadcaster followed basic security procedures – using both a secure password and two-factor authentication – the attackers could have gained access through a third-party plugin, as we saw just the other week when Amnesty International and others suddenly started tweeting Turkish nationalist propaganda.

According to ABC, the company is working on resolving the problem.

We’ve reached out to ABC for more information. If we hear back, we’ll update this post.